Ok. Once I got over the initial shock of discovering that I might actually be white, I realized that there was no way in hell I could let my mother know… I mean, it’d break her heart!

So I figured I’d better try and redeem myself and set the record straight by giving you the skinny on what black people like, as only a black person could tell ya! 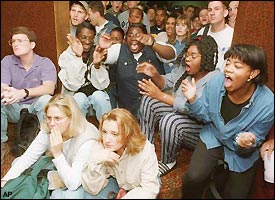 So there! You see, I AM black. Well, mostly. Now would somebody give me back my afro pick, please?