i’m not a racist, i just play one on tv

Earlier this week, I listened to a spot on NPR about the tensions between Latinos and blacks in post-Katrina New Orleans. During the piece, the correspondent spoke with a Colombian entrepreneur living in New Orleans who shared some of her concerns about what might happen if Barack Obama was elected president. Apparently, she was convinced that if that occurred, black people would basically declare open season on Latinos, robbing them in the streets.

She made sure to note, however, that she wasn’t racist.

Ever since it started to look like Obama actually had a chance of cinching the Democratic nomination, it seems like there’s been a new race-based controversy to pop up every week. Each mini-debacle sets off a heated flurry of opinionated responses from everyone that can form a loosely coherent sentence: from political pundits to the guy standing next to me at the coffee maker in the morning.

Instead of engaging in and being distracted by the fray, I’ve been trying to hold my tongue as much as possible, offering a few terse replies only if I’m directly asked what I think about the latest issue. But hearing this NPR piece sort of pushed me over the edge. There are some very disturbing trends that I just can’t keep from commenting on any longer. Namely,

“I’m not racist”
The ‘I’m not racist’ disclaimer has become the modern-day equivalent of a cootie shot. All you have to do is say those 3 words and…voila! An instant invisible force field goes up around you, giving you carte blanche to say all manner of racist / prejudiced things without anyone being able to call you on it.

A long-held belief of mine that always raises eyebrows when I share it with others is that, ‘Racism should be kept in the home’. Could you pull your eyebrow down please? Let me explain. The reality is that, as tribal-minded people, we are always going to have some disparaging – and often humorous – generalizations about people from another (or even our own) tribe. Someone’s driving spastically in a Corolla? Gotta be an Indian (red dot, not feather). Someone dancing spastically on the dance floor? Probably a white dude. Guy overcharging you for parking downtown? Say it with me…Ethiopian. Woman screaming, ‘PICK COLOR!’ when you walk into the nail shop? Yeah…Chinese. Actually, she’s more likely to be Vietnamese, but they all look alike, right?**

Point is, we’ve all made or laughed at a joke that pokes fun at someone of a particular race, ethnicity, geographical origin, etc. And please don’t front and say you haven’t. You know you love Dave Chappelle as much as I do.

But I believe that if you’re going to say / do something racist, say / do it in the privacy of your own home (or car, ‘cause those bloody Indians are always on the move). I don’t doubt for a minute that some of my ruddy-necked co-workers probably eat their meals on confederate flag placemats and ask Jesus to, “Please bless David Duke, John Rocker, and Bill O’Reilly” every night in their bedtime prayers. Honestly, I really don’t give a hot one. Just as long as they put their ‘plays well with others’ face on as they close the front door behind them each morning and head to work with moi, we’re cool. A certain amount of tribalism is understandable. But when it crosses over to prejudice – meaning when an individual makes illogical and irrational judgments against whole groups of people based on these tribal stereotypes – that’s a huge issue. Which brings me back to the chica on the radio. To think that this seemingly educated woman believes that if a black man is elected President, it will automatically usher in the day where black people begin attacking latinos on the street, is not only racist and prejudiced, but also mildly retarded. To think that she can tack the words, ‘I’m not racist’ on the end of her statements and thereby excuse herself from admitting the fact that she really is, is a pathetic ruse that I, for one, ain’t buying. Sorry hon, your racism is showing.

“What you say ‘bout Obama?”

Is it just me or has every black person you know all of a sudden become black pride enthusiasts or black nationalist watchdogs, ever vigilant and on the lookout for someone who might be saying something wrong about Obama in particular or black folk in general? Don’t get me wrong, I absolutely believe that we should call people on the carpet who are supporters and enforcers of institutionalized racial prejudice or those that are given a platform to spout hate-based propaganda with impunity. But a lot of people (especially my people) aren’t even taking the time to really evaluate what they’re seeing and hearing before they launch some passionate, uninformed attack against it.

Here it is 2008, and African-Americans are still sooooo worried about how other people see us, that we can’t even be honest and real about some of the f*cked up issues plaguing our community. We spend so much time listening out for the N-word, and chasing crackpot comments around from place to place, that we often fail to focus on creating fundamental change in our families and homes, and completely abandon the notion that it’s how we view ourselves that matters more than how others view us.

And now we’ve got the right Reverend Jesse Jackson giving Obama flack about calling for greater responsibility from black fathers!? Now if Jesse had a penny’s worth of sense, he would sit his philandering, irresponsible ass down and STFU, instead of jumping on the bandwagon of folks whose ears prick up every time they hear the phrase, “Black people need to…” coming out of somebody’s mouth other than their own.

Monkeys. The lot of them.

The politics of fear
Which brings me to the latest brouhaha re: the cover pic of Barack and Michele Obama on this month’s New Yorker. 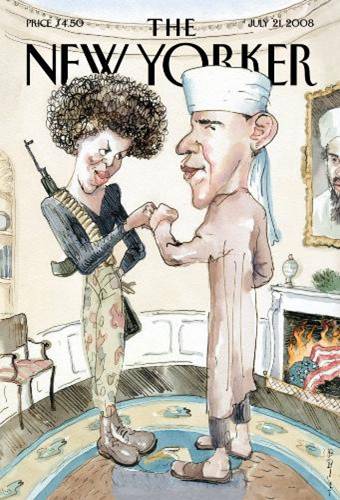 First off, I have to say, the sh*t is funny, in the same way that Dave Chappelle is funny. Even though the topics he makes fun of are ‘sensitive’, what he speaks is TRUE. Sad as it may be, there are people who REALLY do believe that Obama is a terrorist agent trying to infiltrate the White House, and the cartoon is a satirical, intentionally provocative slap in the face to those who hold that idea. Is the cartoon 100% appropriate? Ehhh, ok. It’s probably straddling the fence a bit, especially since there’s no corresponding article that could further explain the intent of the image. But the title of the pic is ‘The Politics of Fear’, which is the primary tool that hysterical anti-Obamaites are using to win devotees to their cause. As in:
– Be afraid of the big black man and his big black wife.
– Be afraid because he has a Muslim name and yet, your women secretly find him attractive.
– Be afraid of what the blacks might do if one of their own was the leader of the nation that has systematically denigrated them and other people of color for hundreds of years.
– Be afraid of seeing a picture of a President and a First Lady that look different than every other one you’ve seen in the HISstory books since your youth.
– Be afraid of a time when fear and hatred might actually motivate people less than hope and change.
– Be afraid of a time when the words ‘I’m not racist’ will have lost all their magical powers.
– Be afraid of having your real self exposed for all the world to see.

** Please note: these statements were made for illustrative purposes only. I’m not racist. 😀

P.S. – I plan to do my part to end racial divisions by marrying Jon Stewart. Swoon.