Looks like we’ve officially entered the dog days of summer here in Atlanta, and temps will consistently hover at mid-90 or more every day for at least another month. Most days, just the thought of eating is enough to make we want to break out into a profuse sweat, but it’s not exactly feasible to go on a fast ‘til September. During this time of year, I instinctively switch to lighter fare (read: white wine instead of red, LOL), but I still need something substantial enough to keep me from getting hungry again a few hours after I’ve eaten.

I was watching a recent episode of The Barefoot Contessa on DVR, and saw a delicious-looking preparation of a lobster Cobb salad, which Lady Ina served in hot dog buns. Talk about shabby chic, right? The recipe below is my adaption of Ina’s recipe – for budget purposes, I ‘shabbied’ the lobster for shrimp, and for presentation purposes, I ‘chic-ed’ the hot dog buns for whole wheat bolillo rolls.

This one is light, quick, and tasty enough that you’ll still be thinking about it a couple of days later. The recipe makes enough for about 4 sandwiches. Or if you like, you can skip the bread altogether, and just eat it as a salad. 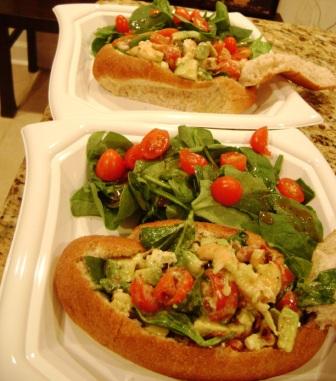 Ingredients:
1.5 pounds shrimp, peeled (I have them steamed at the store to save cooking time)
1-2 Haas avocados
1 pint cherry tomatoes
Blue cheese crumbles
4-6 slices of turkey bacon, cooked (of course, you can use regular if you like)
Baby spinach leaves
Bolillo rolls (or French bread)
1 ½ Tbsp Dijon mustard
5 Tbsp Olive oil
1 lemon, cut in half
Salt
Pepper
Large bowl to hold everything

I start by cubing the avocados. Run a sharp knife lengthwise around each avocado, then twist gently to separate the halves. Use a spoon or knife to remove the pit, then remove the peel from each half. Cut into bite size pieces, and place in the bowl. Squeeze a little lemon juice over the avocado and toss lightly to keep it from browning while you finish the rest.

Now, cut the tomatoes in half and add to the bowl. Crumble or rough chop the cooked bacon and add to the bowl as well. Toss in the shrimp (depending on how big they are, you may want to cut them in half also), and then a couple handfuls of the spinach leaves.
To make the dressing, whisk the olive oil, Dijon mustard, ¼ cup of lemon juice, and a pinch of salt and pepper together in a small bowl. Pour the dressing over the other ingredients and toss lightly. Add ¾ cup blue cheese crumbles and toss again.

Make a v-shaped pocket on the top of each roll and stuff with the salad mixture. Sit under a fan, and enjoy this moment of refreshing coolness while it lasts!

p.s. – keep an eye out for me talking more about salads in the August edition of Atlanta Intown paper.