how to make spatchcock chicken 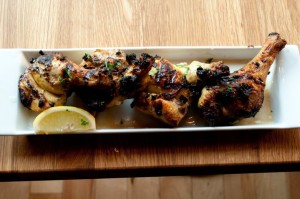 I first had spatchcock chicken a little over a year ago at The Sound Table in Atlanta. The dish was most impressive because of its simplicity – cuts of bone-in chicken, with an herby-citrusy flavor and a nice char on the skin. Determined to recreate the dish at home, I searched the interwebs and discovered that the term ‘spatchcock’ had nothing to do with how the meat was flavored, and everything to do with how the meat was cut.

Put simply, to spatchcock means to remove the spine or backbone of the bird in preparation for oven or grill roasting. Spatchocking is actually the more formal cooking term for butterflying. The whole point of spatchcocking is to allow even cooking of both white and dark meat portions of the bird. As anyone who has roasted a whole bird knows, it can be near impossible to have juicy, fully-cooked thighs and legs without also ending up with dry, overcooked breasts and wings.

Get your head out of the gutter, please.

Since my first taste, I’ve spatchcocked my fair share of birds.  I even spatchcocked last year’s Thanksgiving turkey – it cooked in record time and was the most flavorful roasted turkey I’ve ever had. Dark and white meat were equally juicy. The skin was perfectly crispy, and the under-the-skin seasoning technique I use had infused every bite with serious flavor.

Plus, I get to giggle a bit every time I tell my guests what they’re eating.

salt, pepper, rosemary, thyme, marjoram (or use whatever blend of herbs/spices you prefer)

latex gloves (optional) – I get kinda squeamish when handling raw chicken, so I always don a pair of latex gloves for the prep.

Rinse the bird well, including the inner cavity. Place the bird on a stable surface or inside of a large baking pan, breast side down. Using the shears, cut vertically along either side of the backbone from one end of the cavity to the other. Depending on how good your shears are, this may be easy or it may be pretty hard. Use a bit of elbow grease. Rock the shears back and forth to break the bones on either side of the spine. Channel your inner Hannibal Lecter. Sip a Chianti. You’ll get through it. At the end of that gruesomeness, you should have a spineless bird in front of you, and a bird spine in your hand. Save the spine for making stock, or toss it out.

The secret to really crispy skin on a roasted bird is really dry skin to begin with. If you have time, let the bird rest in the fridge anywhere from 1-24 hours. I usually stick a few toothpicks into the bird and drape a towel or paper towels over them. I don’t like the idea of uncovered raw chicken in the fridge, and the towel would stick to the skin if I didn’t use the toothpicks. If you don’t have time for all that, just blot as much moisture as you can from the skin and proceed with seasoning the bird.

Run your hand gently under the skin covering the bird’s breast, separating the skin from the flesh. Go all the way down to the thigh area, being careful not puncture the skin. Using a teaspoon or your hands, take small amounts of the seasoning mixture and rub all over the bird, under the skin. You may have extra seasoning mixture left over. Take lemon slices and slide them under the skin. I usually place 1 slice on each thigh, 2 on each breast, and tuck a lemon slice under each wing. Sprinkle more salt and pepper all over the skin. Place the bird in a roasting pan and cook for 40 minutes to 1-hour, until done (3 tests for doneness: juices run clear; leg/thigh moves easily in socket; thermometer inserted at thickest part of breast reads at least 160 degrees). Note: When I tried this recipe with turkey, I did not de-spine my own turkey. I bought the bird from the Sweet Auburn Curb Market and had the butcher there make a cut on each side of the spine while the bird was still in its wrapper. I suggest you seek similar assistance for a larger bird.