what is a bon vivant? 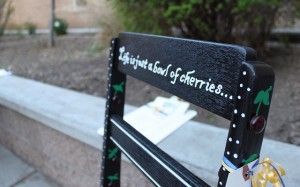 I don’t know where I first heard the term bon vivant, but I do remember thinking to myself, “Now that sounds like something I could get used to being called.”

Or something to that effect.

I do, however, clearly recall a pass-the-time bar game I played a few years back which involved me and a friend sharing our intergalactic spy credentials (don’t ask). During the round where we revealed our alter-ego occupations, I boldly proclaimed that mine was: ‘bon vivant’. To which my friend replied (actually, scoffed) “That’s not an occupation.”

I was and still am indignant about the matter. Being a bon vivant is an occupation. In truth, a bon vivant is only ever occupied by one thing. Everything else is a diversion, or an experiment that helps the bon vivant excel in her chosen profession, which is a simple one: that of living life to the fullest. The bon vivant’s trade is one that should not be taken lightly, but often is. A rare few truly commit to and excel at the task, yet the masses generally treat the pursuit of a well-lived life as much more trivial than the pursuit of money or fame, vice or romance, power or success. 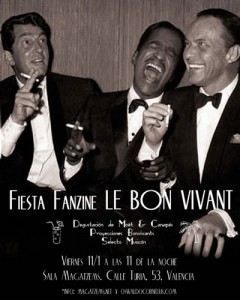 And so the bon vivant that we see in literature and film is often portrayed as the wayward dilettante, or the lascivious boozer, or even the hopelessly conniving dandy. Many of those who assume the moniker in real life also assume that it affords them the right to lift their noses a bit higher in the air. In my opinion, both are miscontrued notions of the term and the persona.

In searching the interwebs for a more accurate description of the bon vivant, I came across one delightfully simple but perfectly illustrative definition.

“If you love good food, good company, good times and something really, really good to drink, then you’re probably a bon vivant. In fact, if you love two out of the four, then you are most likely a bon vivant.”

The above quote is from “Are You a Bon Vivant?”  on the blog, Miss Lola Says…. Miss Lola goes on to explain what bon vivants bring to the… er, table:

“We all know at least one bon vivant. And this is how they make our worlds better:

Miss Lola Says… features well-written articles on etiquette and common sense manners that are suitable for intergalactic spies and bon vivants alike. As bon vivants are known for their refinement, the blog should serve as a handy resource should you need to remind yourself or a less-refined associate of the appropriate behavior in any situation.

I invite you to peruse some of my favorite posts from Miss Lola:

Tips for Riding the Elevator with Me.

In the meantime, I’m working on a series of posts that will delve deeper into what it means to pursue the profession of a bon vivant – including some life examples of famous bon vivants, both real and fictional. Stay tuned.