food as culture – why cooking is important to preserving identity 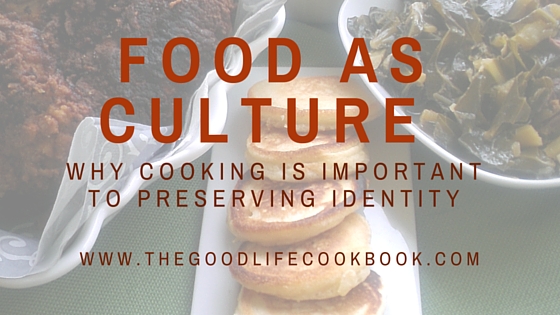 Food has always been important to me.

Not just the consuming of it, but the cooking of it. More recently, food has grown in its importance in my mind because I’ve come to see it as a primary vehicle of culture.

How Food Defines A Culture

When you think of other cultures, there are usually 3 things that define them:

{for example: If I were to ask you what comes to mind when you think of Indian, Japanese, and Jamaican culture – I can pretty much guarantee that – in addition to saris, kimonos and dreadlocks – curry, sushi, and their traditional sourdough basket are going to show up somewhere in the list. }

An individual or group’s food culture is more than just what they eat for dinner, more than a single, iconic dish. Food culture is a complex mishmash of history, geography, climate and social values that go into what food is served, when, where and by whom. It’s an important way of preserving and transmitting the culture as a whole.

The Lexicon of Food’s definition of food culture summarizes it perfectly (if not succinctly): 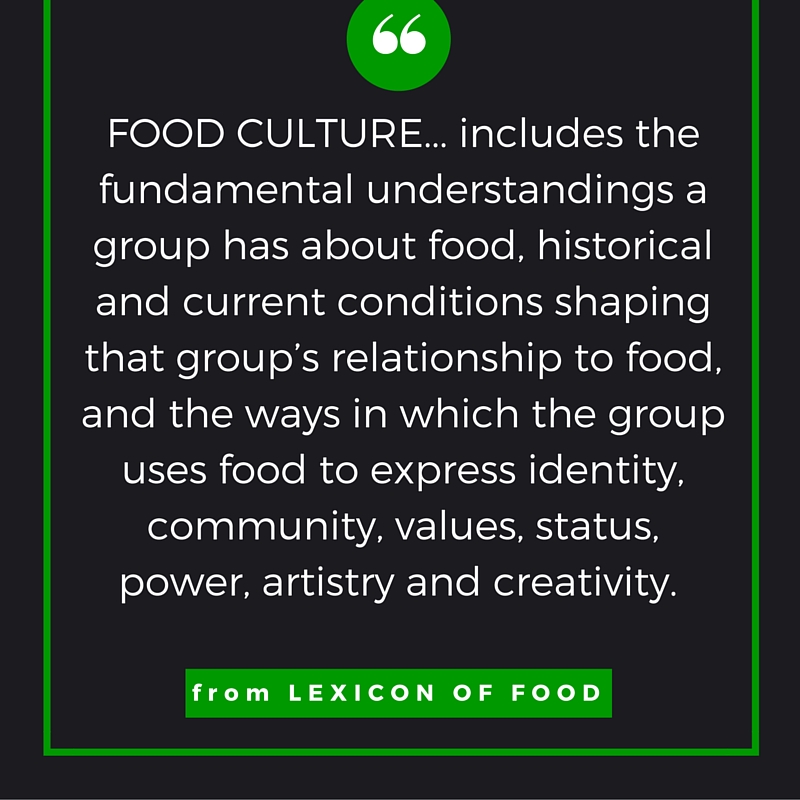 Travel has definitely influenced my perspective about my own food culture as an American, as a Southerner and as an African-American. After having been invited into the homes of co-workers from other cultures, or being cooked for by people I’ve met travelling, I’ve realized how important food culture is in communicating to someone who you are and where you come from.

I have newfound appreciation for Sunday and holiday dinners past at my grandparents’ house, backyard fish frys and barbecues out in the country, sitting on the front porch shelling beans, patiently stirring a pot of grits, all things okra. I’ve recognized how important it is to preserve my own unique culture by knowing how to cook even a few signature recipes that are intrinsically linked to the land and the people I come from. In fact, I see it almost as a responsibility.

What Exactly is ‘American’ Food?

One particular point of dismay when I’ve traveled has been the realization that people from other countries and cultures typically think of American food as either hamburgers or pizza. It’s an unfortunate side effect of the globalization of American fast food chains, and the failure to mass export more authentic, often regional American cuisine. This misconception makes it all the more important for me to continue to hone my skills in the kitchen and add to my repertoire of true American recipes, so I, too, can share who I am and where I’m from with new friends from other cultures and parts of the world.

I challenge you to do the same.

How to Become a Food Culture Ambassador

Even if you don’t consider yourself much of a cook, take it upon yourself to learn how to prepare at least one dish that is representative of your culture. Use it as an opportunity to learn more about where you come from – to understand the connection between the ingredients used in the dish and the place it originated. Call up someone else from your culture – your mom, another person from your hometown – and ask them to give you some pointers on how to make one or more iconic cultural dishes, then invite them over for a taste. Practice making the dish until you feel proud of it, until other people start to request that you make it for their next potluck dinner, their son’s birthday party, their wedding reception. Once that happens, write your recipe for the dish down on really nice paper. Make copies of it and give them out as gifts to people who’d appreciate it.

Culture is many things – food, dress, language – and each element of culture has a story of how it came to be. Preserving food-related stories, and bits of culinary background info is essential to preserving a culture. Unlike many other countries with more homogenous populations, America has a wide and diverse range of cultures living in proximity to one another and intermingling every day. Some degree of assimilation or fusion of cultures is understandable, but when entire food cultures are abandoned for pre-packaged, mass-produced commodifications of a particular culture’s food (see: Taco Bell, Panda Express) it’s a huge loss for everyone. And since profit and mass appeal are the primary motives of food-centered corporations, it’s we individuals who must maintain the authenticity of our respective food cultures, not only for our own families, but also for those curious enough to seek it out, and those who we meet on our travels.