y we remember – current perspectives on the future of black history

The name of the comedian escapes me (Chris Rock maybe?), but there’s a standup skit about Black History Month that, unfortunately, is a pretty accurate summation of the Black History curriculum that I and most of my peers received in school:

“Once upon a time there was a thing called slavery. Some time later, Martin Luther King was born….”

While that synopsis of Black History education was grossly exaggerated for comic effect, it still wasn’t too far from the truth. Throughout elementary and high school, each February was the time for recounting the familiar narrative: we were once slaves, we were once denied the education and opportunities that other Americans were given, and had it not been for the illustrious leaders of the post-Reconstruction and civil rights era, we might never have made it through. Then we’d sing We Shall Overcome three times, listen to an excerpt of Dr. King’s I Have a Dream speech, learn an African dance routine, and return to our regularly scheduled educational programming in March. While I always enjoyed hearing the familiar stories and speeches, I began to notice that, each year, the gap between the era of Black history I was being taught about and the era of Black now I was living in kept growing wider and wider.

It wasn’t until I made it to college – where I enrolled in a freshman World History course at Clark Atlanta University – that I got a more comprehensive understanding of how Black and African history figured in the larger context of human history. On the first day of class, the professor walked in, headed straight for the blackboard, picked up a piece of chalk and drew three figures. The first was a straight line. The second was a circle. And the third, a straight line that then arced back upon itself. It was only after he’d finished his drawings that he addressed the class.

“This,” he began, pointing to the straight line, “represents the European worldview. Everything is about forward progress.”
“This,” as he motioned to the circle, “represents the Asian worldview. Everything is cyclical and eventually returns to where it began.”
“And this,” referring to the straight-line-arc, “Is the African worldview. Ever moving forward, but always drawing on the lessons of the past.”
I would later recognize the straight-line-arc being represented in the Adinkra symbol of the Sankofa bird. Sankofa being a word in the Akan language that means ‘go back and get it’, referring to the idea of taking the wisdom of the past and using it to make progress toward a beneficial future.

It occurs to me that many of us are still celebrating Black History Month the way were taught in elementary school. We recall those icons of the past, laud their praises, recount the stories, and sing the old hymns for 28 days, then it’s back to our regularly scheduled lives in March. Now, don’t get me wrong, I’m not saying we should stop talking about Malcolm, Martin, and Rosa. But the ‘old way’ of approaching Black History Month has caused it to lose some of its relevance in the now. We African-American artists, intellectuals, activists, and entrepreneurs are the ones who are creating the history that future generations will look to to help them guide their own progress. And now that we have ‘gone back and gotten it’… what do we do with it today?

A couple of my contemporaries have dedicated these 28 days to answering that question in their own ways. One, by spotlighting today’s diverse leaders of new media, and the other by issuing a unique call to action for the latest tragedy to hit the Diaspora.

Wayne Sutton, Social Media and Community Strategist at Twine Interactive (an internet marketing firm), has launched 28 Days of Diversity on his blog, www.socialwayne.com. Each day in February, Sutton will highlight an individual who is a leader or influencer in IT, the web, new media, etc. In an industry that has too few brown faces, this is a huge way of exposing those that we might not ever hear about otherwise. Case in point: today’s spotlight is on Atlanta-based blogger, video producer, and media consultant, Amani Channel. In addition to being the founder of Visual Eye Media, Amani is also the community manager for PBA’s Lens on Atlanta, and in his spare time (yes, that’s sarcasm) he blogs at www.myurbanreport.com. Keep an eye on Wayne’s blog for more folks you should meet this month. 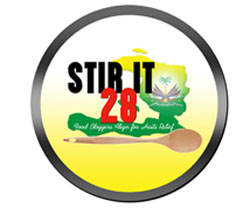 Bren Herrera, an Atlanta chef and food writer, is rallying the global community of food bloggers, chefs, restaurauteurs, and foodies to raise funds for victims of Haiti’s earthquake via Stir It 28. Stir It 28 is a prime example of 21st century community activism, leveraging new media in a 3-part campaign to raise $50,000 within 28 days. 100% of proceeds will be donated directly to Share Our Strength and Yéle. The fundraiser is a multi-city collaboration between Hererra, who blogs at Flanboyant Eats, Chrystal of The Duo Dishes and Courtney of Coco Cooks. Read all about Stir It 28 and how you can participate .

(You’ll be hearing more about Stir It 28 from me soon, as I’ll definitely be participating!)