how to do atlanta – flip burger

The concept of Flip is fairly simple – burgers, sides, and shakes – American classics that everyone can identify with. But when the creative consultant behind the concept is local celebrity chef, Richard Blais, you can expect the simple classics to have some very modern updates.

Located on Howell Mill just past Chattahoochee Avenue, Flip Burger Boutique looks and feels like a retro burger joint with Sex and the City flair. From the outside of the building, large windows reveal a dimly lit dining space with patrons swathed in flattering candlelight. The interior aesthetic could be best described as a post-modern Johnny Rocket’s. Stark white predominates, highlighted by flashes of red and chrome. A bar flanks almost the entire length of the room, opposite a few cushy benches set into intimate alcoves. In the center of the space, two rows of adjoining high-top tables create a communal feel, which is ideal, since you’ll invariably be tempted to peek over to see which of Flip’s many gourmet burgers your neighbor settled on. At the rear of the restaurant is the open-air kitchen where you can observe two chefs feverishly churning out the goods.

The burger offerings are split into two categories, beef (organic, of course) and ‘flip’– non-beef alternatives that will satisfy vegetarians, those who shun red meat, and anyone with a hankering for a pork patty. All of the burgers are slider-sized and served on buns that are part-Kaiser, part Hawaiian sweet roll. Actually, they’re more like sliders on steroids, so depending on how hungry you are, one might suffice, but two are recommended for larger appetites and for indecisives like me and my friends. Among the three of us, we sampled 4 different selections:

Southern – featuring a fried patty w/pimento cheese, was definitely my least favorite. I’m not a huge fan of pimento cheese, plus the super-crispy coating encasing the burger shredded the roof of my mouth. Not fun. 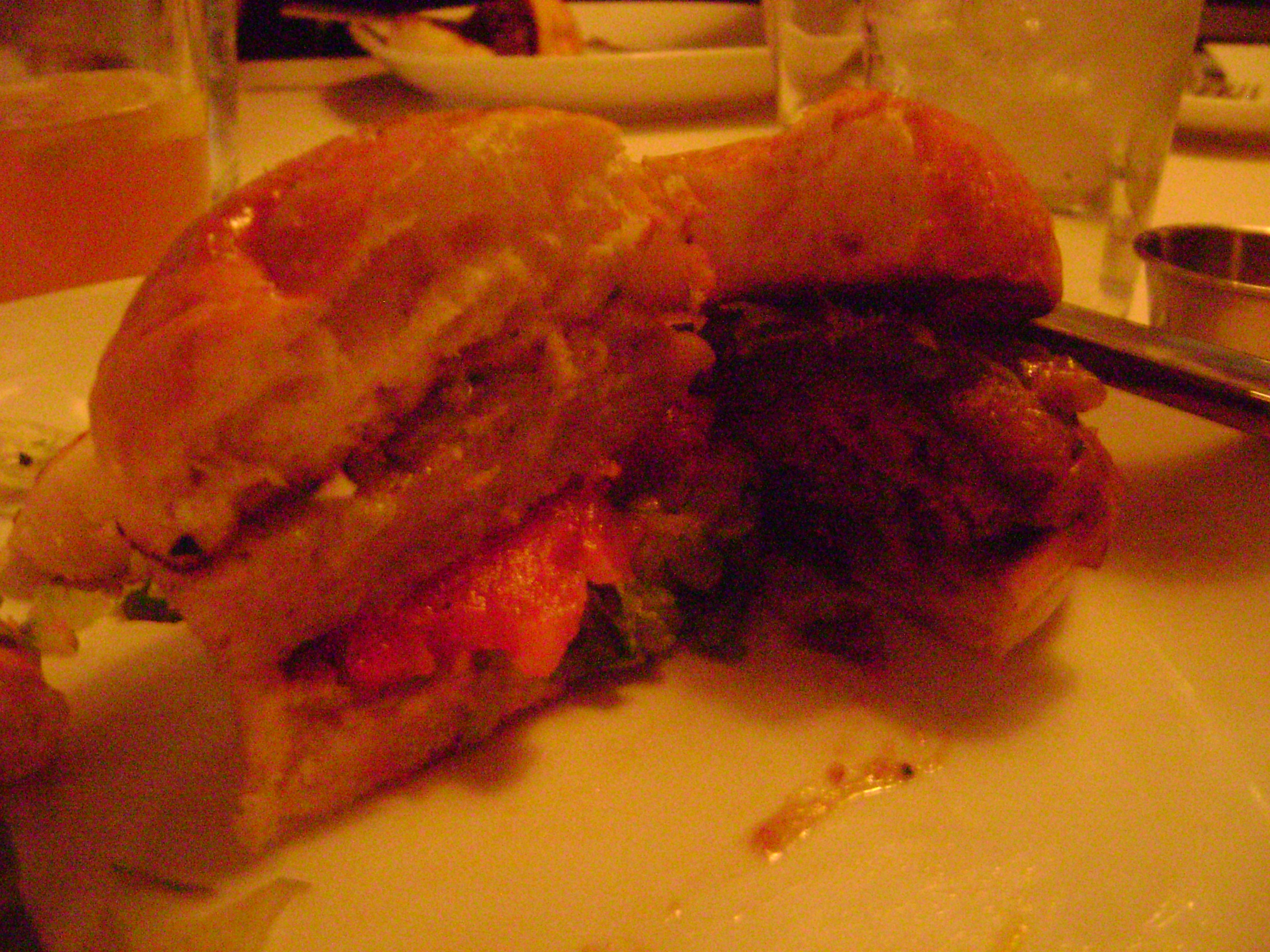 From the Flip side:
Po Boyger – A shrimp patty topped with lettuce, tomato, a fried lemon slice and Old Bay mayo. Delicate flavors, but still very very tasty. I was pleased that the patty wasn’t overly pureed, and I could still identify what I was eating as shrimp.

Bun Mi – An interpretation of the Vietnamese banh mi hoagie-style sandwich. This burger features a ground pork patty topped with cilantro and pickled veggies. It’s spicy, exotic, and complex – I can definitely see it becoming one of the restaurant’s more popular creations.

For our sides we ordered a sampling of sweet potato tots, french fries, and vodka battered onion rings. Accompanying them were ketchup, a dill mayo, and a honey mustard. Fries and rings were decent, nothing terribly remarkable about either. The tots were slightly disappointing – while the flavor was great, the texture was more mushy than crispy.

For dessert, we ordered one of each of the shakes on the menu – The Krispy Kreme and the chocolate. The Krispy Kreme actually has doughnuts blended into the vanilla ice cream base, and the chocolate shake comes topped with marshmallows given the hand-torch toasting just before being served. The shakes are cooled with liquid nitrogen, which aside from just sounding, well…cool, actually makes for a thick, creamy treat that stays that way until the last slurp.

Service was attentive and friendly if not a little gregarious (it was pretty obvious they’d been coached to make some very pointed suggestions on what and how to order). Blais was onsite for the duration of the evening, and stopped by to chat with us briefly. He admitted to being a bundle of nervous energy, which is understandable when you’re preparing to debut your culinary baby to a town of increasingly fickle and increasingly educated diners.

My bill – which included 2 burgers, a side, and a shake – came to over $20. With the baby burgers averaging about $8, it’ll be interesting to see how well the restaurant performs after the initial excitement wears off and the reality of a tight economy settles back in.