my other favorite dorothy – a song, a film, a book

Everyone who knows me know how much I love Dorothy Dandridge, but not too many know of my love for the other Dorothy.

I suppose it all started with one of my favorite Prince B-sides, The Ballad of Dorothy Parker. I

couldn’t have been more than 11 years old when I first heard it, and the song just struck me as even weirder than most of the others on the Sign o’ the Times

album. At that time, I didn’t even know what a ballad was (I remember having to look it up in my big dictionary, you know…like we did before the internet), but I loved, loved, loved that song. Everytime I listened to it, I could envision Prince eating fruit cocktail and taking a bath with his pants on, while flirting coyly with some dishwater blond named Dorothy Parker who could throw him and everyone else in the ‘violent room’ off their game with just a few choice words. Oh, how I wanted to be Dorothy Parker.

It wasn’t until years later that I realized that Dorothy Parker wasn’t a fictional character created by his purple majesty. I think it was during a high school English class that I stumbled across the poems of the real Dorothy Parker, and they had almost the same affect on me as Prince’s ballad. As a teenager, I possessed a pretty biting wit that got me popped in the mouth by my mother more times than I care to admit, and led many of my classmates to believe I was just a mean smart-ass. I was repeatedly shocked at how my earnest attempts at humor were so often misunderstood. But in Dorothy’s writings, I found a wit and sarcasm that I recognized and identified with, even though it was wrapped up and artfully softened by elegant, lyrical verse. I gobbled up each one of her beautiful poems liked sweet-tart candy, and raised my eyebrow and winked slyly at the old gal’s cheeky bon mots.

Just last week I was perusing the aisles of Videodrome (my latest addiction), looking for nothing in particular, and I came across the title, “Mrs. Parker and the Vicious Circle”

, a film that was released right around the time of my high school discovery. How I’d never heard of it before was beyond me, but you can bet I snatched that sucker up and rushed home to watch. Jennifer Jason Leigh played Dorothy Parker, who in her younger years kept company with a motley crew of artists, writers, and intellectuals dubbed ‘the vicious circle’ for their raucous, bawdy gatherings at the Algonquin Hotel in 1920’s Manhattan.

The film details the rocky life, turbulent loves, brilliant writings, and – most importantly – the scathing wit of Parker in great style. Jason Leigh’s portrayal of the writer is memorable, though her interpretation of Dorothy’s voice was a bit distracting at first. Campbell Scott delivers a stunning performance as the low-key, relatively soft-spoken Robert Benchley, Dorothy’s apparent soul mate, though their deep love for each other is never able to be expressed in the open. The rest of the cast is a solid roster of talented, young Hollywood stars of the early 90s: Matthew Broderick, Gwyneth Paltrow, Lili Taylor, Heather Graham, and Jennifer Beals all make appearances.

I absolutely loved the movie for all the aforementioned reasons, but mostly because it finally gave me a visual account and many more details to attach to what little I knew about Dorothy. I only vaguely recalled reading about her slipping into alcholism later in life, never knew anything about the attraction between her and humorist Robert Benchley, and was completely surprised to find out that she willed her estate to Martin Luther King, Jr. Much like the other Dorothy that I’m a huge fan of, her story was one that was as admirable as it was depressing. 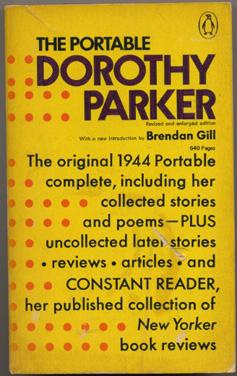 A couple of days ago, I was sharing my fondness for the movie with a friend who has a sizeable library of mostly non-fiction. To my surprise he offered to loan me a book of his – The Portable Dorothy Parker

. The book is a 600-plus page collection of her poems, short stories, Vanity Fair play reviews, and book reviews from Dorothy’s widely read ‘Constant Reader’ column that appeared in the New Yorker. Before reading the book, I’d only read Parker’s poems, which one reviewer aptly described as capturing the ‘pleasure and pain of being a touch too smart to be happy’. But the real treasure in this comprehensive volume are her short stories, each of them a satirical portrait of the society she lived in. Of the ones I’ve read so far, The Waltz is my favorite. In it, a woman who’s been asked to dance accepts, though what she thinks in her head is an entirely different story. A metaphor for male-female relationships of the time. Here’s an excerpt:

Why thank you so much. I’d adore to.
I don’t want to dance with him. I don’t want to dance with anybody. And even if I did, it wouldn’t be him. He’d be well down among the last ten. I’ve seen the way he dances; it looks like something you do on Saint Walpurgis Night. Just think, not a quarter of an hour ago, here I was sitting, feeling so sorry for the poor girl he was dancing with. And now I’m going to be the poor girl. Well, well. Isn’t it a small world.

…What can you say, when a man asks you to dance with him? I most certainly will not dance with you, I’ll see you in hell first. Why, thank you, I’d like to awfully, but I’m having labor pains. Oh, yes, do let’s dance together–it’s so nice to meet a man who isn’t a scaredy-cat about catching my beri-beri. No. There was nothing for me to do, but say I’d adore to. All right, Cannonball let’s run out on the field. You won the toss; you can lead.

…Why I think it’s more of a waltz, really. Isn’t it? We might just listen to the music a second. Shall we? Oh, yes, it’s a waltz. Mind? Why, I’m simply thrilled. I’d love to waltz with you.

…I’m so glad I brought to his attention that this is a waltz they’re playing. Heaven knows what might have happened, if he had thought it was something fast, we’d have blown the sides right out of the building…. Ow! For God’s sake, don’t kick you idiot, this is only second down. Oh my shin. My poor, poor shin that I’ve had ever since I was a little girl!

As I’ve been enjoying my loaned book, I can’t help but wonder what kind of stories Dottie might write if she were still around. As it is, I have to content myself with listening to her tell me well-crafted stories from the past that make me laugh out loud, even on a dreary, soggy day like today when I’d much rather be in my cozy little home submerged in a bubble bath. With my pants on, of course.