When one door closes…

We wrestle not against flesh and blood but against spirits and principalities.Ephesians 6:12 (paraphrased)

Recently my pastor has been teaching on ‘breaches’, which he’s defined as a sort of spiritual door that is opened or closed based on an individual’s actions and choices.
As I understand it, a breach is analogous to spiritual cause and effect. With each thought, choice, or action you make, you create an environment that either welcomes in or shuts out a certain spiritual energy or principle that corresponds with that thought, choice, or action. 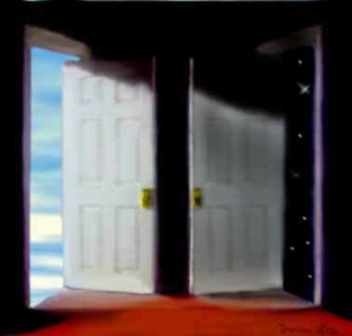 As he’s talked more and more on this topic over the past couple of weeks, I’ve grown more intrigued by the notion and have started to examine the areas in my life where I have created breaches based on my actions, and to determine if they are the types of breaches that are beneficial to me. As I performed this self-assessment, I recalled an incident that occurred a couple years back during my annual doctor’s visit. My doctor is a traditionally trained M.D. but she’s also a holistic practitioner. On this particular visit she informed that I had fibrocystic breasts – a benign condition that is evinced by small lumps in the tissue. She did her doctorly duty by handing me a pamphlet that explained some of the dietary causes of the condition. But she nearly surprised me to tears when she said quite pointedly, “I often see this in women who’ve had their heart broken”. My first reaction was, “Hell, doc. Who hasn’t had their heart broken?” But I had to admit to myself that I was currently in a rather emotionally damaging relationship that I was desperately trying to make work because I’d never gotten over the failure of a previous one. All the diet changes in the world wouldn’t have fixed that.

We often have the tendency to see things in black and white – only looking for causation on the material or physical plane. E.g., ‘I got sick because I didn’t cover my head when I went out in the cold’. ‘I lost my job because my boss doesn’t like me’. ‘I can’t save money because I don’t earn enough’. But if we were to examine our situations from a spiritual context, we might begin to see that there are breaches – both good and bad – that we’ve created that are actually the root cause of our situations. We may even find that there are inter-generational breaches that were created by our mothers, fathers, grandparents, etc. that remain open because no one in our ancestral line ever made the change that would reverse said breach. What we see on the physical plane is merely the manifestation – the ‘fruiting body’ – of the spiritual forces we’ve welcomed into our lives.

Once you take the time to be honest with yourself about the thoughts you’re harboring, the choices you’re making, you may find that the real reason you can’t save money is because you’re stingy with giving to other people when they need it. Perhaps you got sick because you’ve been harboring bad feelings about your neighbor. In essence, there may be some healing or therapy to be done that simply can’t be found on the surface or over the counter.

Behold, I have put before you an open door which no one can shut…
Revelation 3:8

After I had completed assessing my own ‘breaches’, I found that there were quite a few problem areas that I needed to work on – some un-forgiveness I’m holding on to, some commitments that I haven’t kept to myself or others – that have opened the door for unwelcome energies to take up residence in my spirit.

To start the process of healing, I spent some time in deep breathing and meditation. I spoke the names of all the individuals that I was harboring resentment against (including myself) and said simply, “I forgive you”. I called each of those unwelcome energies (fear, overindulgence, worry, anxiety, cynicism, etc.) by name and firmly told each one that there was no place for them here, and then called each of their contrasting energies by name and welcomed them in. I ended with prayer and by reading a few Bible passages. You can Discover More Here, chick on this site.

Even though I know that one self-therapy session is not enough to change my life forever, the process of going through that exercise instantly made me more conscious of the connection between the state of my spiritual environment and my physical environment. However you choose to begin your healing is up to you, just know that it is a beginning, just one of many doors that you have the power to open or close as you see fit.