“…maybe your soul you’d sell to have mass appeal”
~ Guru

Today is the deadline for six well-known ministers to hand over records of their spending to Senator Chuck Grassley, ranking member of the Senate Finance Committee. Two of the so-called ‘Grassley Six’ are Atlanta-area preachers: Bishop Eddie Long of Lithonia, and Rev. Creflo Dollar of World Changers Church International in College Park. Of those two, only Dollar has agreed to participate with the Committee’s investigation.

So just who is this Senator Grassley and why is he after these ministers specifically?
Good question. 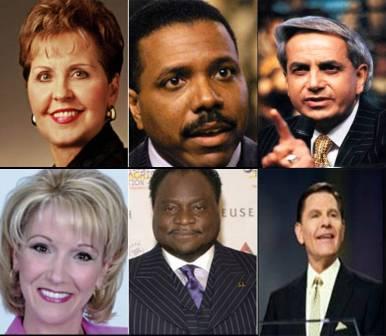 A Republican from Iowa, one of Grassley’s self-professed missions as a Finance Committee member is a “crusade to ferret out tax avoidance schemes and shelters”. According to the press release on his website, Grassley had received “complaints from the public” that prompted him to launch a more detailed investigation into six media-based ministries to ensure that money given to them has been “spent as intended and in adherence with the tax code”. The other ministers being scrutinized are: Benny Hinn, Kenneth and Gloria Copeland, David and Joyce Meyer, and Randy and Paula White.

When this story first broke in November of last year, ‘god-children’ and ‘dirt-worshippers’ alike were all riled up about it. Those who supported the ministers called Grassley’s probe a modern-day witch hunt, just another way that the devil was trying to silence the Word from spreading among the people. Those who supported the investigation thought it was high time that these flashy ministers were taken down a peg or two and lambasted anyone who would ever follow their teachings as blindly faithful sheep.

What’s my opinion?
Gee, thanks for asking.

I have to admit that I’m a bit biased. For a large part of my life I was Catholic. The priest of our parish always had a decent car and a decent place to live – all of which was paid for by the diocese. It just instilled in me the notion that the members of the church should provide the man of god with the basic essentials so that he can focus on his duties of religious study and service to the church. And why would a truly focused spiritual leader require anything other than the basics?

If you take a peek at the Bible, you’ll notice that the prophets of old weren’t big ballin’…they lived austere lives with the most meager surroundings. Many times, they didn’t even know where their next meal would come from, but they were always provided for (1 Kings 17:1-16). The kings (a.k.a. politicians) of the Old Testament were the ones living in luxury, and quite often fell victim to the trappings of excess. At which point, the wild-eyed, threadbare prophet would come in and admonish them from straying from their faith (2 Samuel 12:1-7). You see the same dynamic play out in the New Testament, where the Sadducees and Pharisess have taken on the role of the opulent leaders of the community, and Jesus and John the Baptist are the revolution-minded ascetics who dare to wake them from their spiritual sleep.

“It is easier for a camel to pass through the eye of a needle than for a rich man to enter the kingdom of God” (Matthew 19:24)

Spiritual parallels aside, what’s really the crux of the matter is this: these ministers are the heads of very large, very visible non-profit corporations, and just like the executives of for-profits, they are bound by certain regulations that have nothing to do with Biblical principle per se, but have everything to do with ‘giving unto Caesar’. So when good ol’ Caesar (a.k.a. Grassley and his friends at the IRS) comes a-knocking and says they got some ‘splaining to do…well, what’s the problem with that? It’s no different than the SEC investigating the side dealings and intermingling of personal and corporate finances by the heads of companies like Enron, Tyco, and Worldcom. The heads of those companies bilked thousands of people out of their retirement funds and 401k monies, all because they wanted to keep getting richer on the backs of the people supporting them.

At least they weren’t doing it in the name of the Lord.