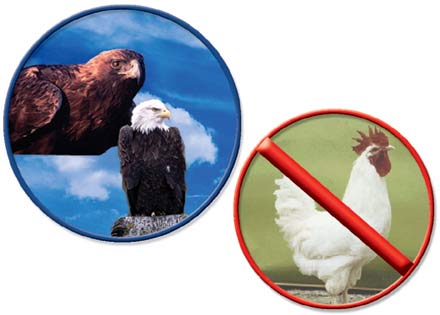 Look, brother farmer. I believe that eagle laid a couple of eggs. Go get those eggs of hers, bring them down, and put them under one of your setting hens. Then, when the eggs hatch, those little eaglets won’t know who they are. They will think they are chickens, so they won’t fight back and bite you. They won’t claw you. They will be peaceful and calm because they won’t know who they are.

Of all the fantastical things that people often wish they could do, why is it that so many people wish that they could fly? It occurs to me, that maybe most haven’t considered that flying is something of a solo activity.

A bird cannot fly if it’s carrying another bird along with it. Even when mother birds teach their young to fly, they don’t pick them up and take to the air with them. They wait until the chicks are old enough, and then they kick them out of the nest.

If there’s one thing that I’m sure of, it’s that I – and everyone else – was born with wings (not literally, of course). But despite that knowledge, I’ve often been frustrated at my failed attempts to fly as far or as high as my vision allowed me to see. Upon reflecting on some of the times when my flight was cut short, I realized why. Too often it was because I was trying to carry someone along with me who hadn’t yet gotten the hang of their own wings or learned to fly for themselves. They’d see me swoop by and yell out from their perch, “Hey, that’s cool. I wanna do that too! Can you teach me?” And in my well-intentioned naivete, I’d cry out, “Sure  thing. Just hop on my back and I’ll show you how I do it!” But soon after they’d hopped on, we’d both begin to descend rapidly, tumbling and flailing helplessly against the sky, until one of us had to separate from the other so we both wouldn’t end up hurtling to the ground below.

The lesson to be learned from this is clear: If you want to fly, you must let go. If you want to go higher and farther than you’ve ever gone before – in your religious faith, in your career, your personal life, or even your workout – you can’t carry along someone else with you that isn’t capable of doing the same thing. And if you want to ‘teach’ someone else – your husband, your friend, or your child – to fly as you may or may not have already, you will have to do three very difficult things. 1) Make sure that they’re ready, 2) give them a swift quick in the ass, and 3) be prepared to watch them fall for a bit, before they get the hang of it.

Of course, not every person with ‘wings’ has been told that they have them, or believe that they work. And not surprisingly, those are the people who never get too far of the ground. Is it any wonder that we call those folks, ‘chickens’?