how to get sexy with food In a recent article on this here blog, I mentioned that eating was one of the few activities that engages all 5 senses at once, and that travel was a close second.

Well Dear Reader, once again, I have something to confess. My Southern demureness (and the fact that my Mom occasionally reads this) kept me from truthfully asserting my real choice for 2nd place in the ‘stimulates-all-your-senses’ category… Sex.

There. I said it. Sexsexsexsexsexitysex…sex! Have you clicked away yet? Unsubscribed? Fine. Better do it now before we really pass the PG-13 zone (Yes, mom. That includes you.).

So, why the change of mind?

After reading a recent Creative Loafing article on the eroticism of food, I was emboldened by this quote from chef-cum-prophet Paul Luna:

“Sexuality and erotica play essential roles in exploration and self-discovery. These elements seem to be culturally suppressed in Atlanta and Southern culture — at least, overtly.”

Not one to be restricted by the often prudish Southern attitudes towards either food or sex, I decided to take Chef Luna’s quote as a challenge to overcome my own self-repression and explore – in one fell swoop – the various facets of the food-sex connection. I hope it’s as good for you as it was for me.

Mole (pronounced, mole-ay) – A Mexican sauce that comes in as many varieties as there are sexual positions (well, almost).  When prepared from scratch, it’s a labor of love that typically combines rich chocolate with chiles and spices 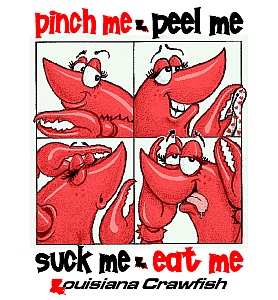 like cumin, and cinnamon. Like most new adventures in bed and out, mole might take some getting used to,  but if you find it’s not for you, you can always go back to more tried-and-true tastes.

Peel-and-eat crawfish – The well-known instruction to ‘pinch the tail, suck the head’ is sexy, albeit in a somewhat juvenile way. But hey, silly can be sexy too. Plus, any eating experiences that requires tearing at food with your hands, getting your fingers all messy and sucking your digits clean can be a real turn-on. Of course, you’re not limited to crawfish. Try other peel-and-eat seafood, fresh cut fruit, Moroccan or Ethiopian food, or, for you prudish Southern-folk, barbecue.

Truffles – Truffles have an earthy, mouth-watering flavor, but they can be both hard to find and very pricey. As an alternative to whole truffles, a bit of sprinkled truffle powder or drizzled truffle oil can transform a conservative dish into something downright decadent.

Mango – This one has highly personal significance. I dated a gent once who literally made me blush at his method of consuming every fibrous piece of a whole fresh mango, all the way down to the pit. But even if your mang0-masticating skills aren’t as… entertaining, the fruit itself  – with its blushing exterior, brightly colored flesh, and exotic fruity flavor – is enough to titillate.

– An enchanting story of two lovers who, for years, can only express their passion for each other through food. Keep an eye out for the making of Mexican mole.

– Man, those Japanese are weird. While this film centers around a Japanese housewife on a quest to make the perfect bowl of ramen, the movie is interspersed with several seemingly unrelated food scenes. Of particular interest are scenes of a couple who really enjoy playing with their food. Like, really.

The Cook, The Thief, His Wife and Her Lover

– a deliciously dark drama that is at once brutal and beautiful. 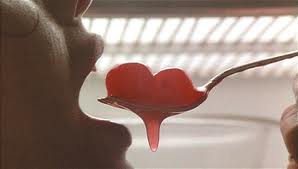 – Kim Basinger, a young unscary-looking Micky Rourke, and a refrigerator full of goodies. A classic ‘food-play as foreplay’ scene.

According to an article in Psychology Today, the link between food, sex, and music isn’t circumstantial, it’s scientific. Here are some sexy food-centric sounds to get you in the mood.

The Sensual Woman – Jello makes a notable appearance in this slickly sexy song from the soundtrack of Snatch (warning: some explicit language). 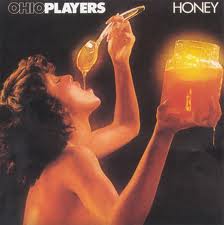 Kelis’ Milkshake – Yeah, I did it. So what? You need the Vitamin D.

And for a song that seems to be a song about food that’s really about sex but is really about neither, D’angelo’s soulful ballad ‘Brown Sugar‘ takes the cake.

You might also want to check out my YouTube playlist: music to cook to – lots of spicy, savory, and sweet sounds for heating things up in the kitchen or any room of the house.

Some food scents are so arousing, you might even call them ‘olfactory Viagra’. But these scent-ual smells don’t have to be confined to the kitchen. Scented candle, oils, and scrubs are perfect ways to bring the smell of your favorite foods into the boudoir.

Coffee – Even if you don’t enjoy drinking this stimulating beverage, the scent of a fresh-brewed pot or freshly ground beans is quite invigorating, even arousing. Maybe that’s the reason so many first dates happen at coffee shops? Or maybe it’s because coffee and sex have been inexplicably linked since the 16th century. If you really like the scent of coffee, a quick home-made body scrub of ground coffee and olive oil is an easy way to be enveloped by the aroma all day long. 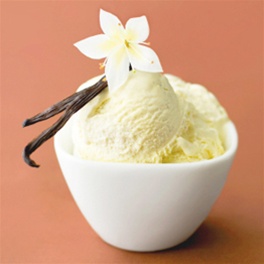 Vanilla – a comforting smell whose soothing, calming effect could ostensibly make your sweetheart more open to your advances. It’s also alleged to stimulate the production of the sex hormones testosterone and estrogen.

Japanese Quince – Some historians believe that the apple referred to as ‘the forbidden fruit’ in the Garden of Eden was actually a quince. Ancient Greek mythology associates the quince with Aphrodite, the goddess of love. While I can’t tell you what a quince tastes like, I can tell you what one smells like. Well, kinda. The japanese quince scented products from Seda France

are so mouth-wateringly good that they’re well worth the price.

title photo:Food is sex by Mr. dale, on Flickr