Hands down, brunch is my absolute favorite meal (or mix thereof) – just another manifestation of my decidedly dualistic nature, I guess. But there’s also an implied indulgence in brunch that I think is what really makes me love it. When you sit down for brunch, you’re saying to the world, “Yeah, I was too lazy to get up for breakfast, so what? I can still have my (pan)cake and eat it too!”

Throughout the South and especially in Atlanta, Sunday brunch is a hallowed weekly ritual, kind of like Saturday feijoada for Brazilians. As such, there are several restaurants throughout the city that are well-known for their take on this holiest of hybrid meals – many of them don’t even bother serving dinner. Two of my favorites are The Flying Biscuit and J. Christopher’s. The Flying Biscuit’s hallmark is obviously their made-from-scratch biscuits, but to me their French toast – with raspberry sauce and honey crème anglaise – is the show-stealer. The roasted potato skillets at J. Christopher’s are a perennial favorite of mine primarily because they’re the egg-less alternative to an omelette (I don’t really like eggs, and only eat them hard-boiled or hard-poached). And both places serve turkey or chicken sausage – which for some reason is still a restaurant rarity these days, though I can’t understand why.

Since it’s my favorite meal to eat (and to cook) I have a pretty good assortment of brunches I love to prepare. So I thought I’d share one of them that features my takes on the dishes mentioned above. 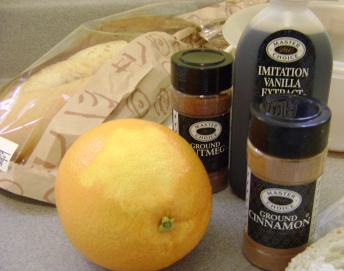 Herbs / seasonings – I use: oregano, basil, thyme, marjoram, garlic powder, black pepper, seasoned salt or blackened seasoning
Cheese – this time it was thin-sliced mozzarella, but shredded cheddar or jack or pretty much whatever you have in the fridge will do
Turkey sausage
Loaf of French bread
Egg
Whole milk
Vanilla flavoring
Cinnamon, nutmeg, allspice
Orange zest
Condensed milk
Raspberry preserves
Chopped pecans
Butter
Bossa nova – I think brunch goes best with it, dontchu? Plus it gives me just the right rhythm to cook to… 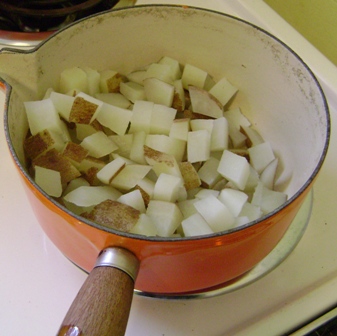 I start with the potatoes.  Usually 1 med-large potato is plenty for two people (brunch is better when shared right?).
Pre-heat the oven to 425. Wash and cut the tater into small chunks, leaving the skin on. When you’re done cutting, add the potatoes to a pot of water and bring to a low boil for about 7 minutes or until they’re tender enough to be easily pierced with the tip of a knife. The parboiling shortens the roasting time. While the taters are boiling, I dice the onion, green pepper and tomato and chop some cilantro that I’ll add to the dish later.

Next, drain the potatoes and place them in a bowl of ice water to stop the cooking process. Prepare your roasting pan by coating lightly with oil to keep the potatoes from sticking. Drain the potatoes well and spread them in a single layer on the pan Season liberally with oregano, basil, garlic powder, etc. Slide them into the preheated oven. They’ll go for about 15 minutes. 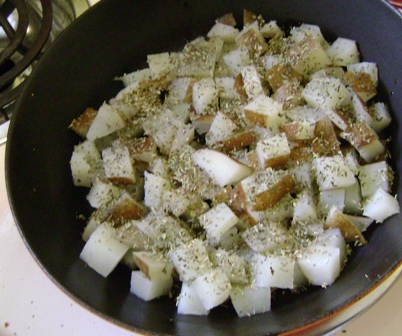 On to the meat…. Heat a skillet on med-hi, add a small amount of oil (canola or veggie, not olive), then add the sausage and cook until nice and brown on the outside. Turkey is pretty low in fat, so you may have to add a wee bit more oil as it cooks to keep it from sticking. Remove from the skillet and drain in paper towels, then wrap in foil so they’ll keep warm until the rest is ready. 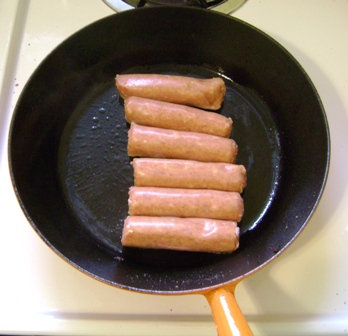 Now it’s time to prep for the French toast. Slice the French bread into about 2-inch thick slices and set aside. In a medium bowl, add 1 egg, about 2/3 cup of whole milk, 1 tsp of vanilla flavoring, the cinnamon, nutmeg and allspice. I also add about ½ teaspoon of orange zest. Note: I like my French toast on the eggy side – makes for a bit of a crust when it cooks – but you can play with the egg-to-milk ratio to find what you like. Also – when I have it on hand – I like to add a capful or 2 of Appleton’s rum to the mix…c’mon, you know you’d like it ;-)! Dip each slice in the mixture for a few seconds on each side, then set them aside. I usually place mine on a sheet of foil and let them rest in the fridge or freezer. 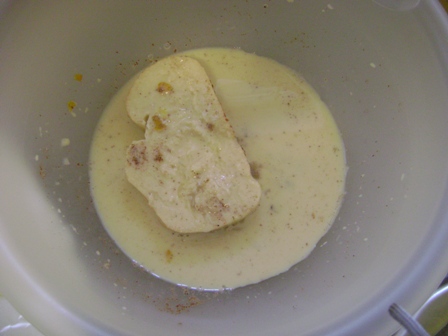 By now, your potatoes should be done roasting. If not, make yourself a cup of coffee and sip slowly while you enjoy the sun streaming in through the kitchen windows and the tunes playing in the background. 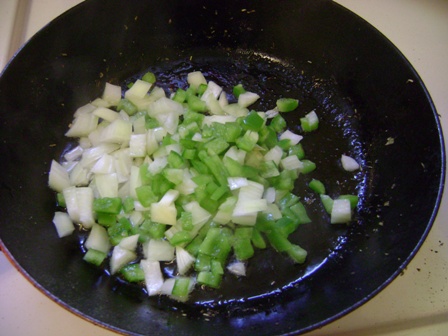 Remove the potatoes and set aside. Turn the oven off and move the sausage to the oven, so it doesn’t get cold. In the same skillet you used for the sausage (the pan drippings are full of flavor), add about a tablespoon of oil and heat on med-hi. Toss in the peppers and onions and sautee until the onions are golden. Next, add the roasted potatoes and sautee for about a minute to combine with the onions/peppers. Turn the heat off and gather the potatoes in a mound on one side of the pan. Top with the cheese and let rest so the cheese can melt. 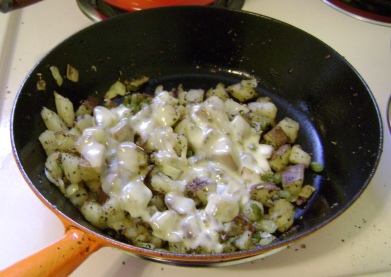 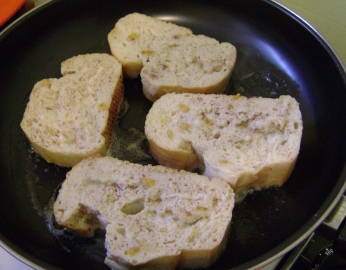 In another skillet, add a tablespoon of butter and heat until it begins to foam. Add as many slices of your soaked bread to the pan as you can fit. Cook until golden brown on each side. Remove and place individual servings on plates. Drizzle each slice with the condensed milk and the raspberry preserves (give the preserves a few seconds in the microwave to make it more fluid). Top each slice with a sprinkling of pecans.

Add a heaping mound of the potatoes to the plate and top with the diced tomatoes and a bit of the chopped cilantro. Serve with the turkey sausage and another cup of coffee. 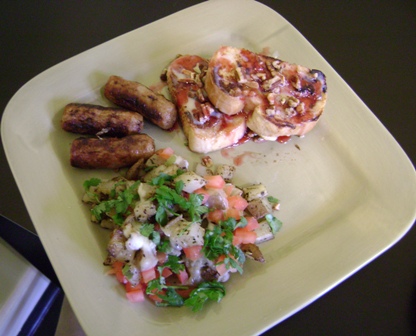