how to do panama – panama city

Panama is Central America’s other destination. While Costa Rica is the hottest spot among tourists seeking an eco-adventure, its neighbor offers just as many opportunities for an up-close experience with nature plus even more culture, history, and romance. A new world country with tons of old world charm, Panama is only a short trip from home, but is light years away from ordinary.

Though it’s fairly small, the country offers a huge amount of variety – crowded cities, historic ruins, mountains, beaches. In fact, you might call Panama the little isthmus that could. Each region has its own unique cultural flavor and geographic characteristics. On my 4 day / 3 night visit, I got a small taste of all that Panama has to offer by taking a mini-road trip through 3 well-known areas in central Panama: Panama City (Ciudad de Panama), El Valle de Anton, and Gamboa national rainforest.

My experience is shared through a series of fictional letters home to a loved one.

Greetings from Ciudad de Panama! We arrived safe and sound, but of course, the adventure began almost as soon as we stepped off the plane. After narrowly avoiding an ugly American moment about a $5 tourist card (I’ll ‘splain later), my Spanish skills were put to the test – first in clearing customs, then in picking up the car I’d reserved, and finally with negotiating Panama’s crazy ass roads to get to our hotel downtown. Apparently exit or street signs take away from the natural beauty of the place, so I had to pull over and ask for directions, not once, not twice, but tres tiempos. Can you just imagine the hilarity? Me speaking in halting, broken Spanish just well enough to get my meaning across, and the person I’m asking – when they finally get what I’m talking about – happily and eagerly responding in a flood of rapid-fire Spanish? Please believe though, no complaints here. The Spanish podcasts I downloaded a few weeks ago, have definitely come in handy. I knew the language barrier would be a worthwhile challenge, and with each person I speak with, I’m getting more and more comfortable. I already feel like I’ve earned my merit badge in ‘driving while Spanish’ and ‘gangsta ass street maneuvers’ all in one short trip from the airport to the hotel!

Casco Viejo (the part of the city we’re staying in) is beautiful, ugly, romantic, and slightly intimidating all at the same time. It sort of reminds me of the French Quarter in New Orleans, or what I imagine Old Havana looks like – a place frozen in time, but not in age. Narrow cobblestone streets file between 17th century structures, all of them in varying states of decay or renewal. Many of the old buildings – including the hotel we’re staying in – are being renovated and turned into modern lofts and apartments. Our room – one of four available for rent from Los Cuatros Tulipanes – is a prime example of the modernization that’s going on…it’s absolutely gorgeous! Casa Mendez is a two-level, one-bedroom flat with beautiful tiled floors, exposed stone accents, and huge two-story windows overlooking a small inner courtyard. As soon as we walked in, we were instantly refreshed from our long airport journey. 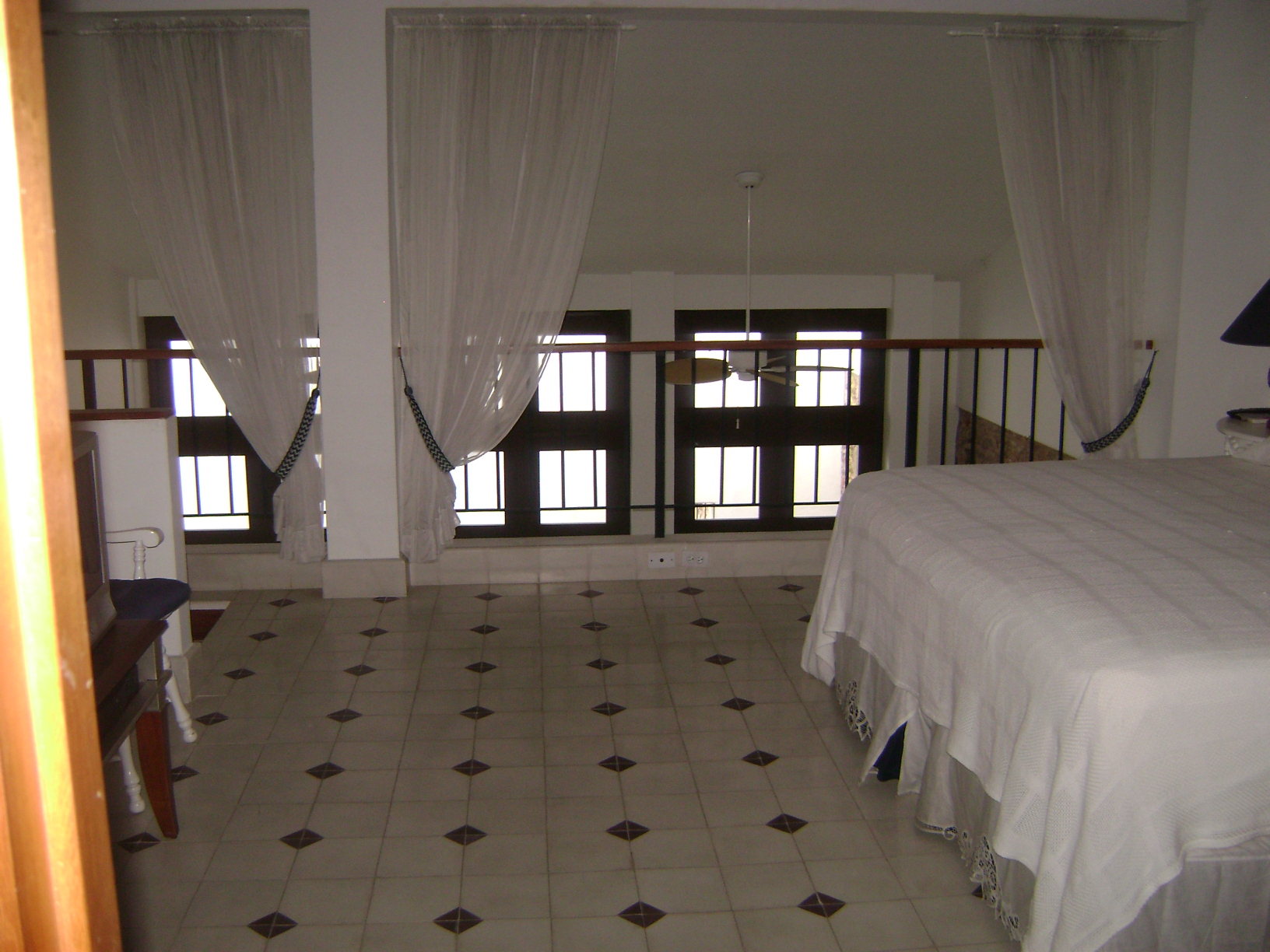 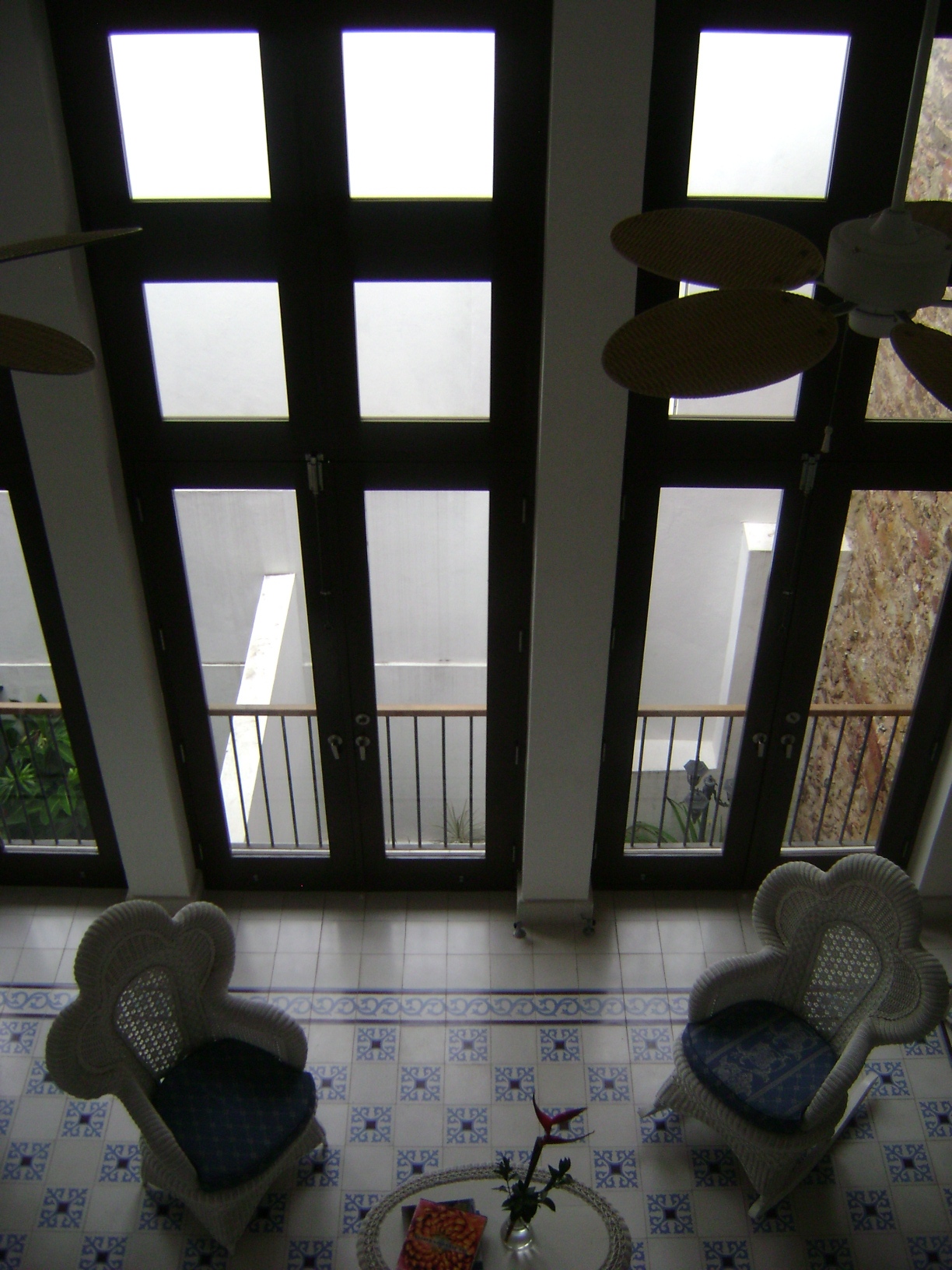 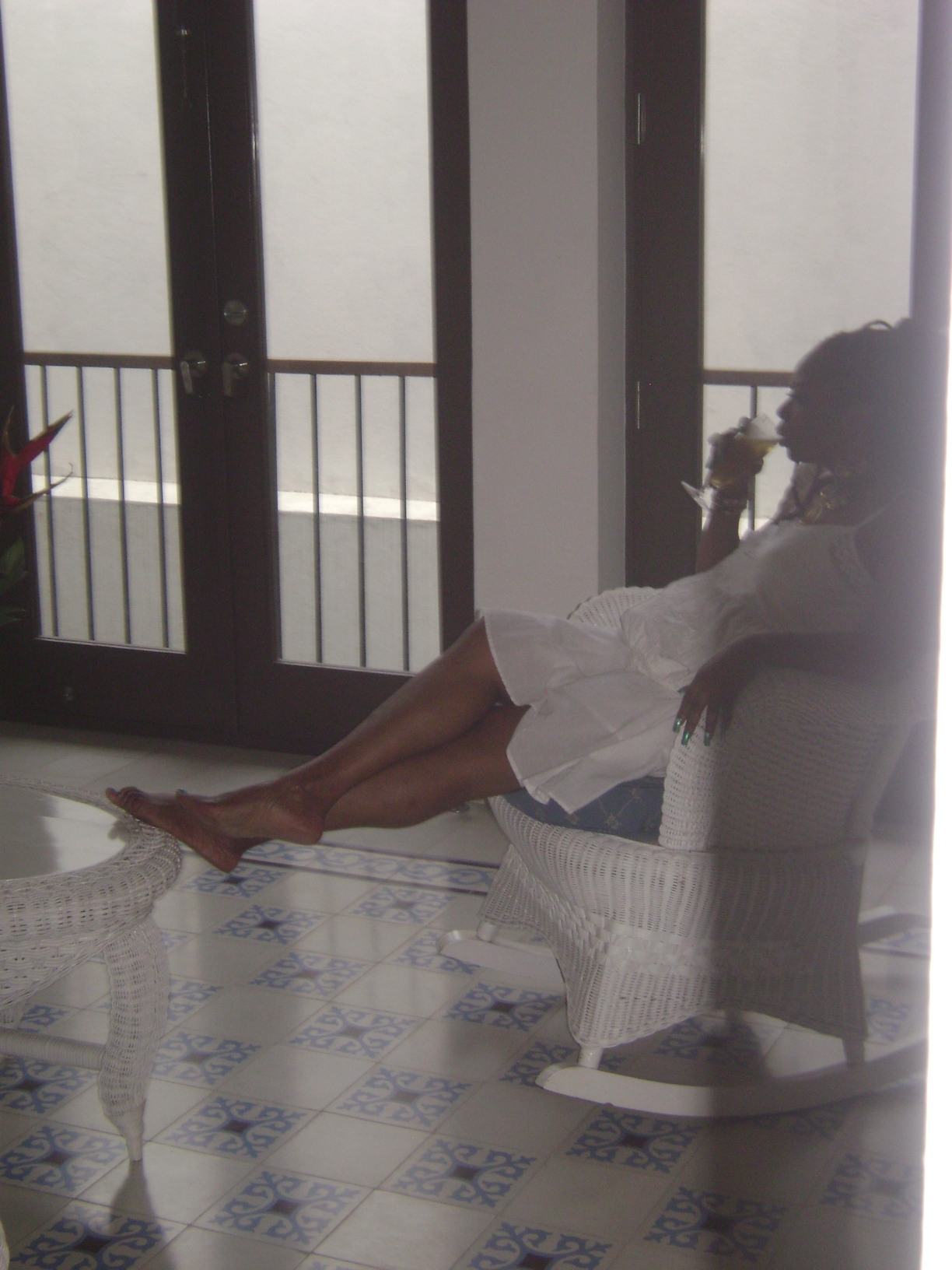 After getting settled in, we ventured out to explore the surrounding area. About a block away from our room is Plaza Bolivar, one of several squares in Casco Viejo that’s home to a sprinkling of cafes and shops, and a public monument of some sort. First order of business was celebrating our arrival with a couple of drinks and a light bite. After checking out the few restaurants in the plaza, we settled on Casablanca, for no other reason than it seemed to be the most populated. Our server, who thankfully spoke more then a little English, informed of us a few Friday-night hot spots in the surrounding area that we might want to check out later. Mental notes were made as we settled back in our patio chairs to enjoy the early-evening sights of the plaza and savor the food. Mom chose a dish that looked and tasted like huge, fresh fish sticks, while I went with for patacones – twice-fried, smashed green plantains; the Panamanian version of tostones – with an accompanying tomato-based seafood sauce. 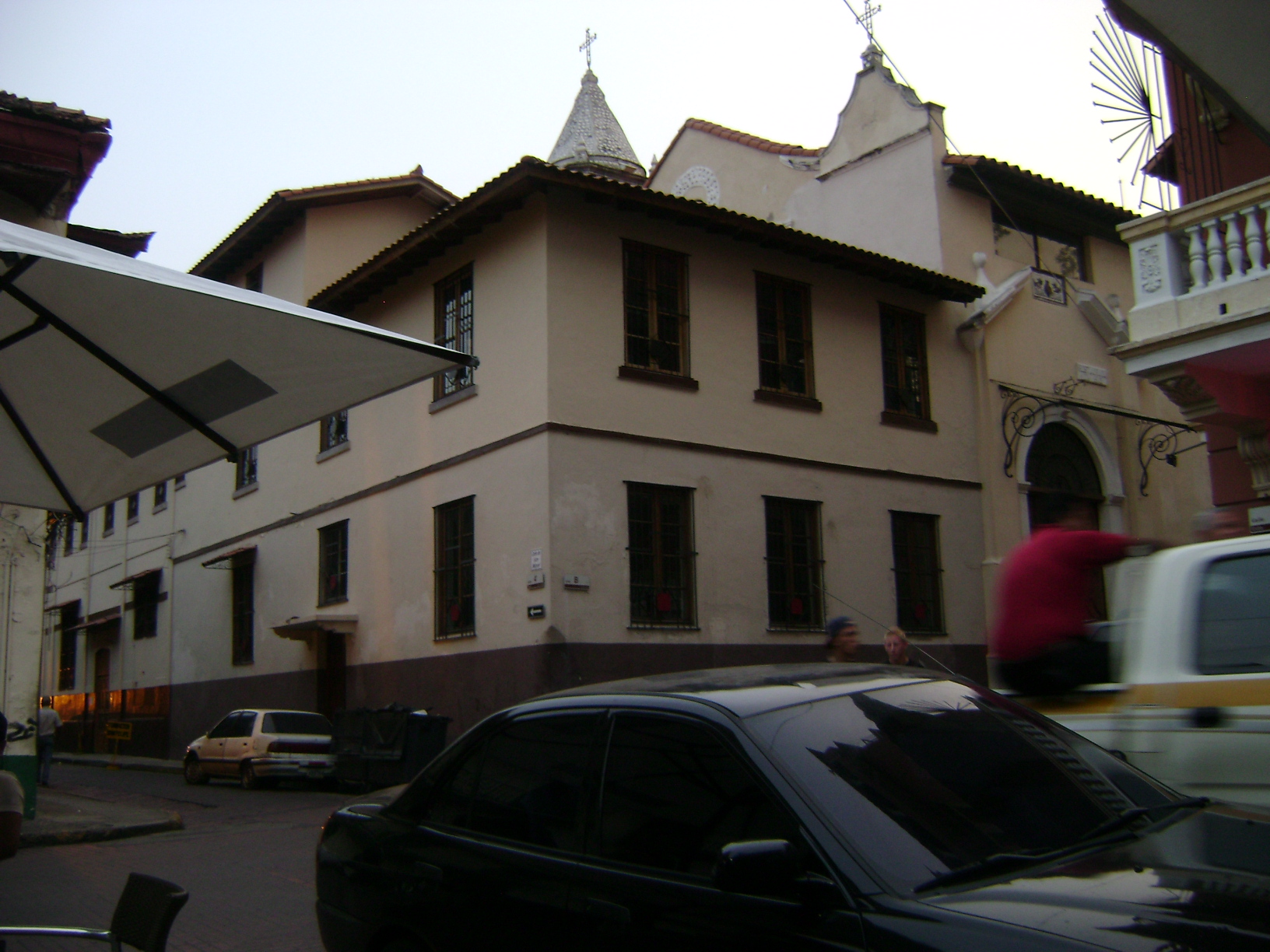 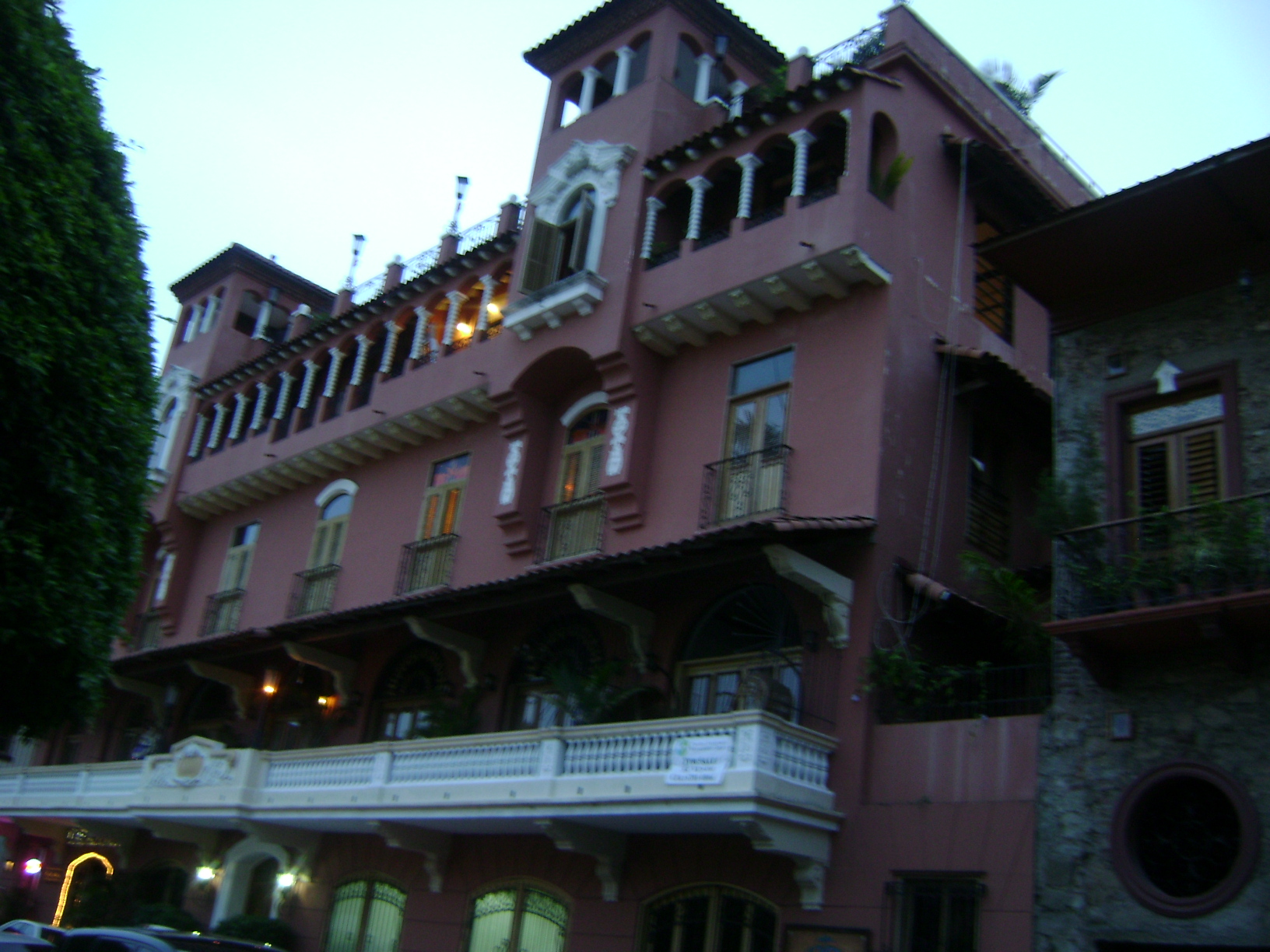 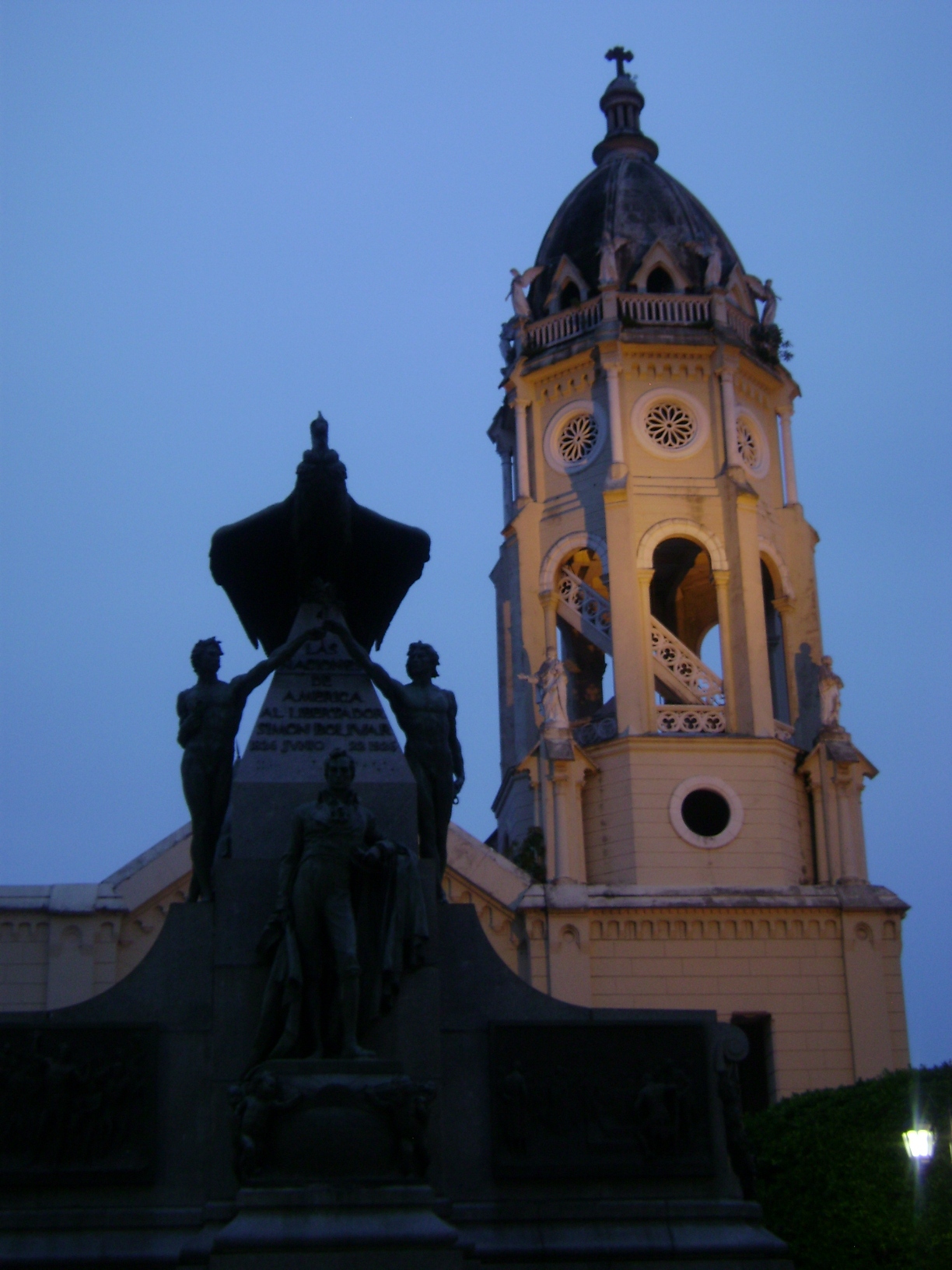 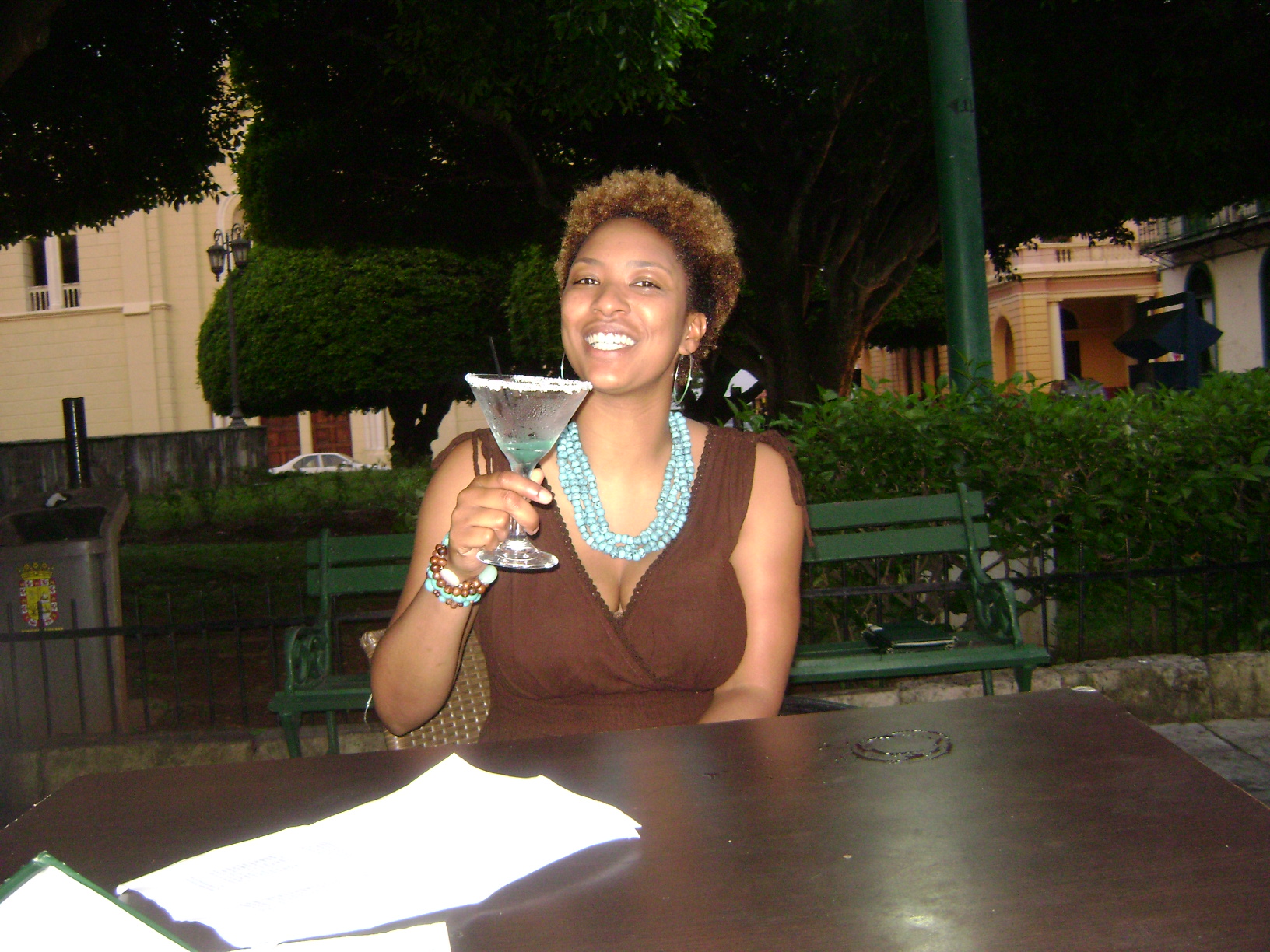 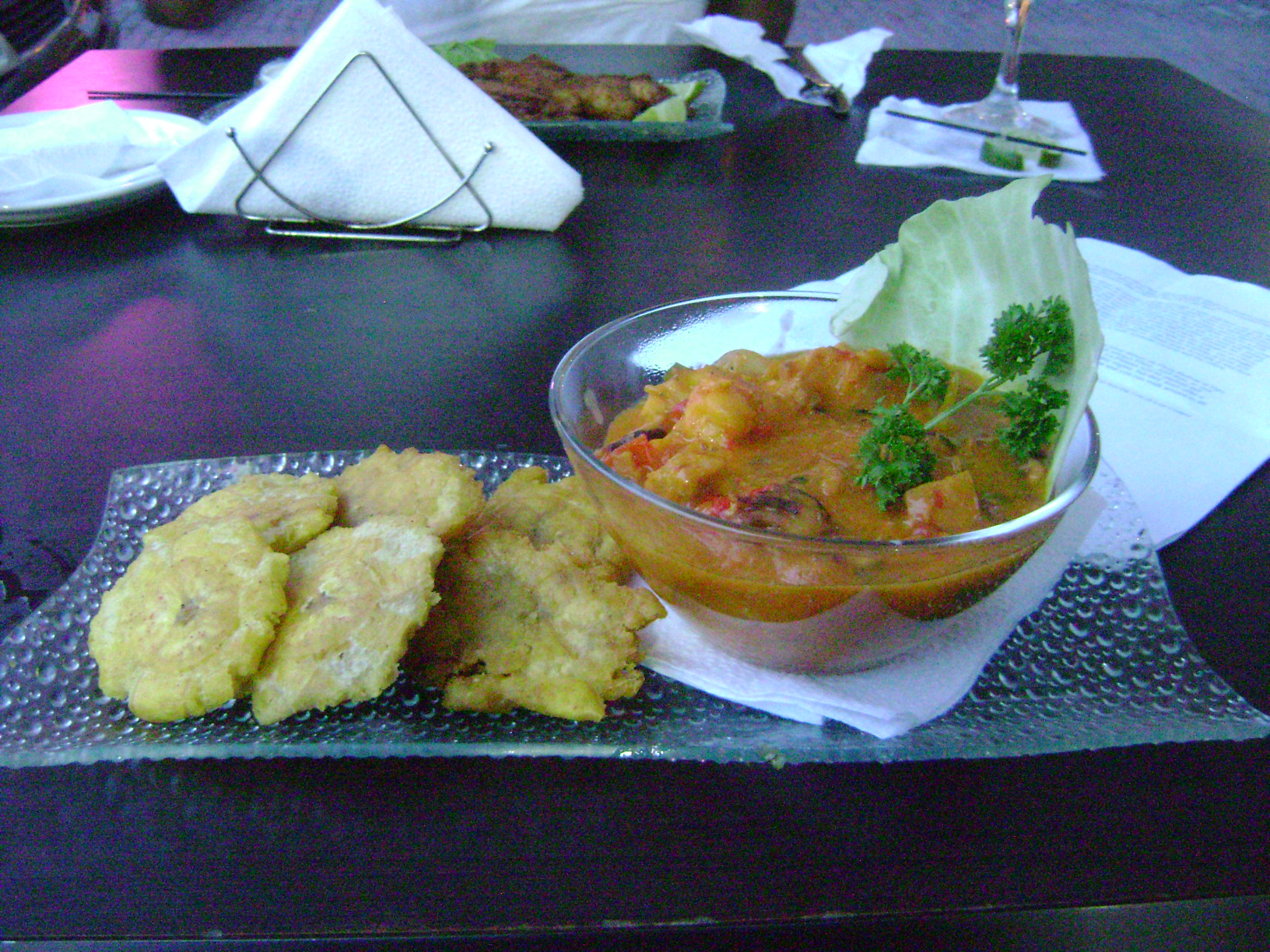 We finished our snacks from the vending machines like those from Vending machines perth, so we set out on a quick walking tour. At first, we were a little cautious, since the sun was setting and some of the streets looked sketchy, but the presence of M-16 toting policeman on almost every corner gave us at least the semblance of safety. We ducked into a bar / club named Platea that was rumored to have live jazz most nights. Since it was still early, the place was pretty much empty – just the bartenders there setting up for the night, and us with no place else to go. So what better to do than have a drink? As the bartenders served us, they urged us to come back later that night – a live band would be playing salsa and there would be a nice crowd. Taking their advice, we decided to make our way back to Casa Mendez and relax until the nightlife had picked up a bit. But just as we rounded the corner on the block leading to our room, the sound of men’s voices accompanying acoustic guitars wafted down from the windows of the building across the street from our place. 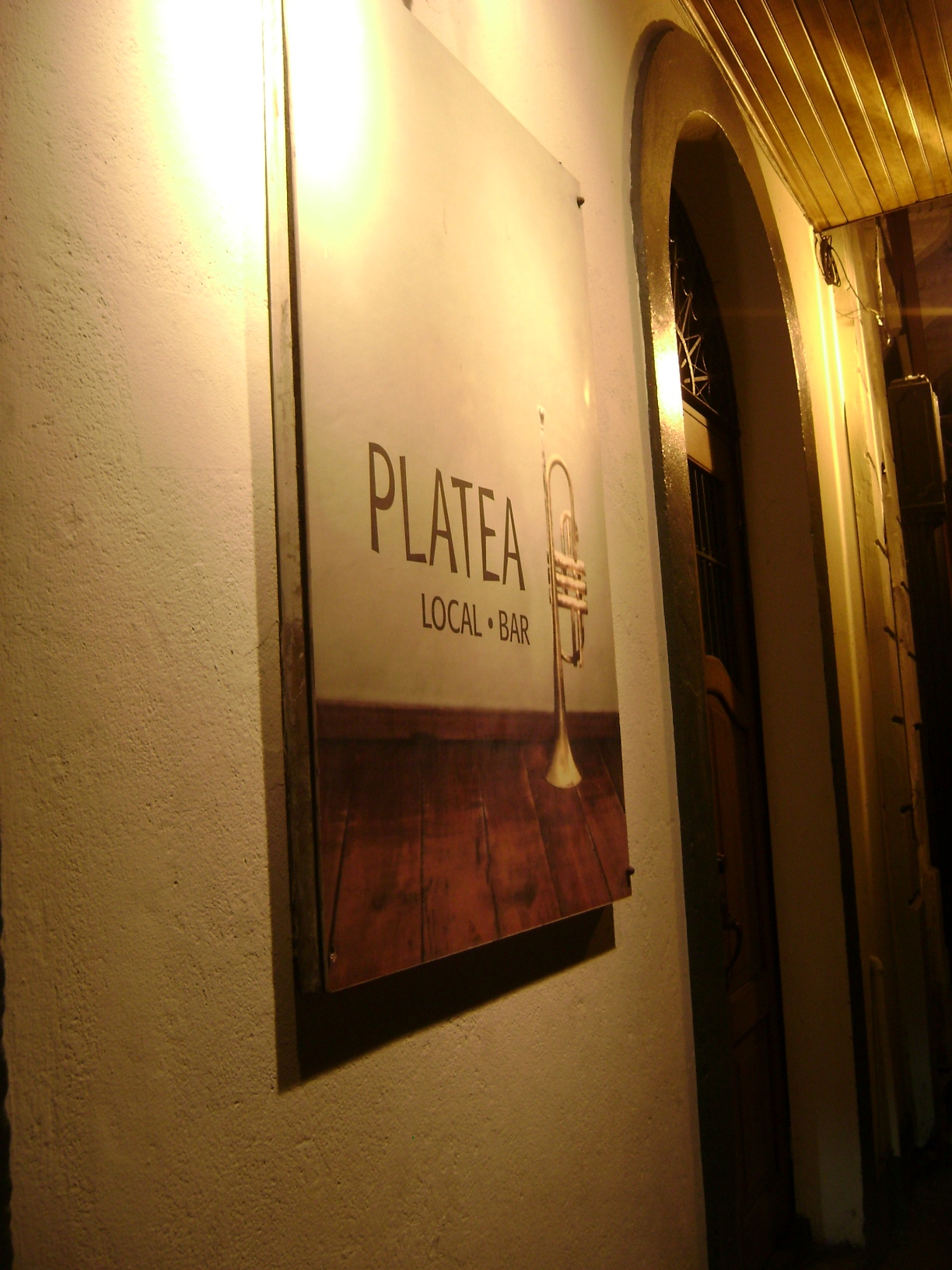 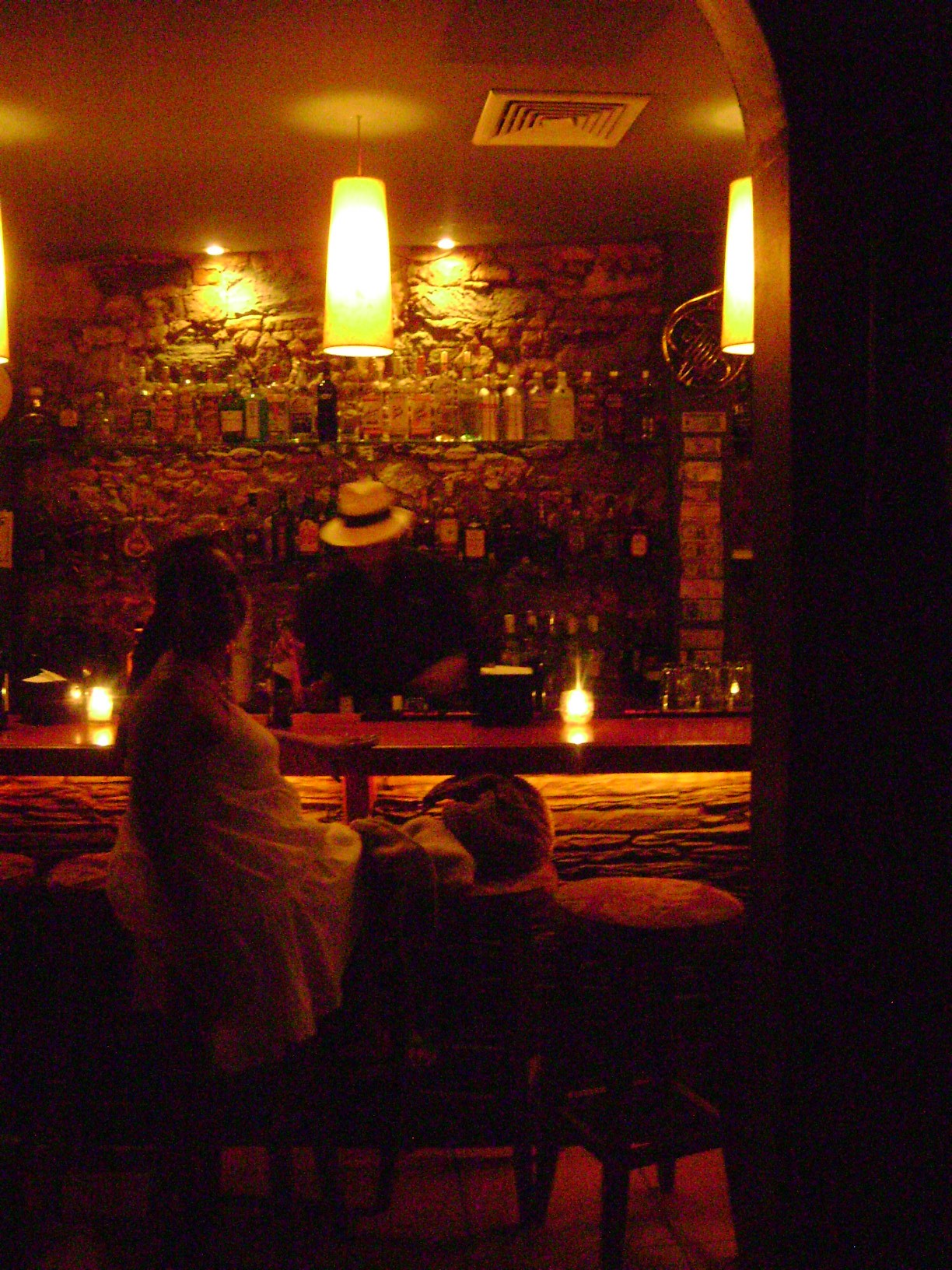 The building – Casa Gongora – is an old government structure that’s been converted into an art gallery and performance space. We tipped in, not sure if the place was open to casual passersby, but the old man at the desk inside simply motioned for us to sign in. On display downstairs were several photographs of some very sensual body art by Ramon Almanza. I lingered for a while checking out the photos, before the music drew me up the grand wooden stairs, where a real-life ‘tres caballeros’ was entertaining a small crowd seated at patio-style tables. We grabbed one of the open tables and enjoyed as the trio sang song after song, while a pleasant breeze invited itself in via the large windows surrounding the crumbling interior. I recognized at least one of the songs – a passionate, acoustic version of Celia Cruz’s La Negra Tiene Tumbao. But another that I’d never heard before was so enchantingly beautiful, that I just had to lean over and ask one of the older ladies at the table next to us, what the name of the song was. She told me: ‘Contigo en la Distancia’, which (in my bad Spanish) translates as: ‘With You in the Distance’. 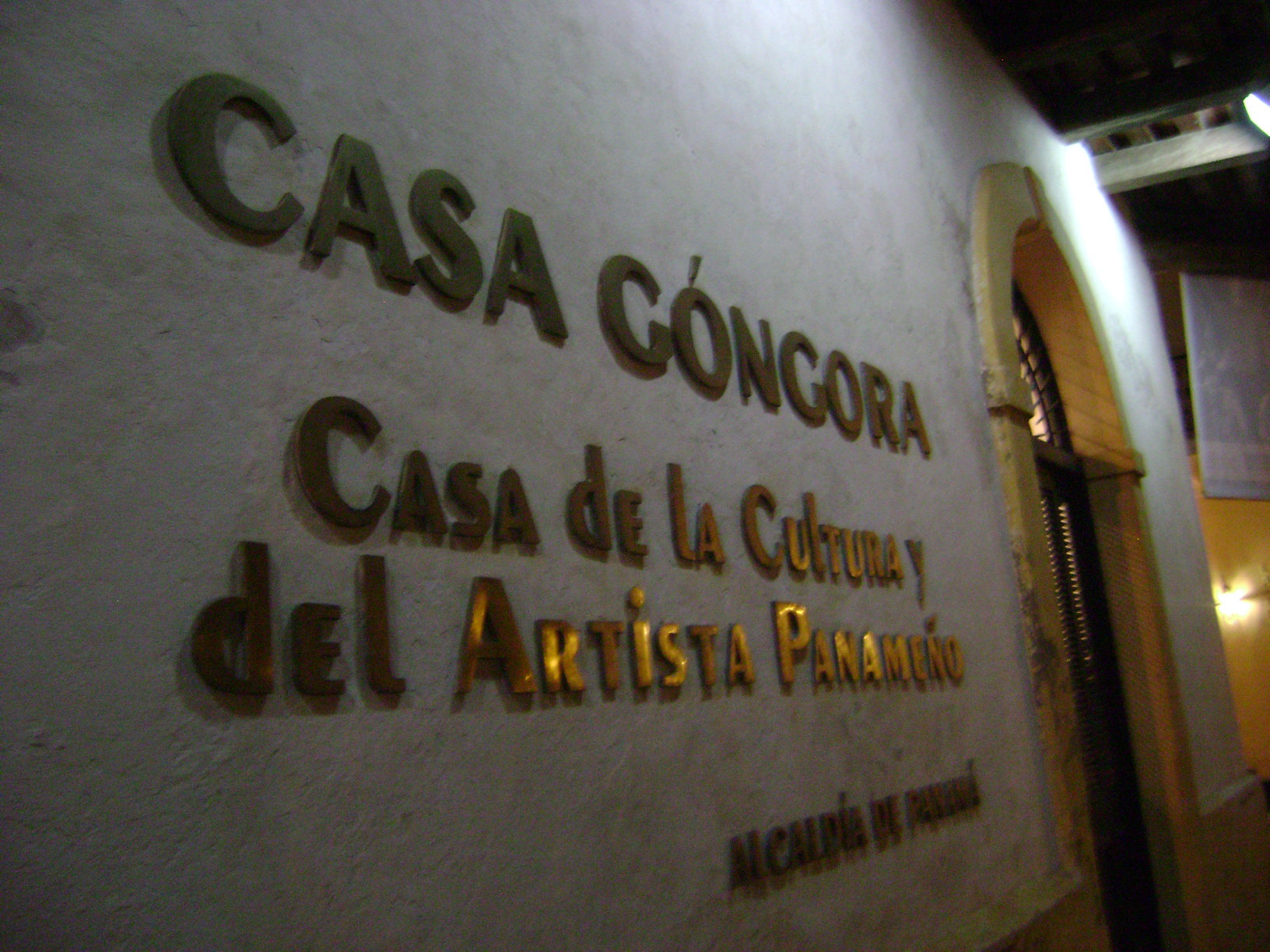 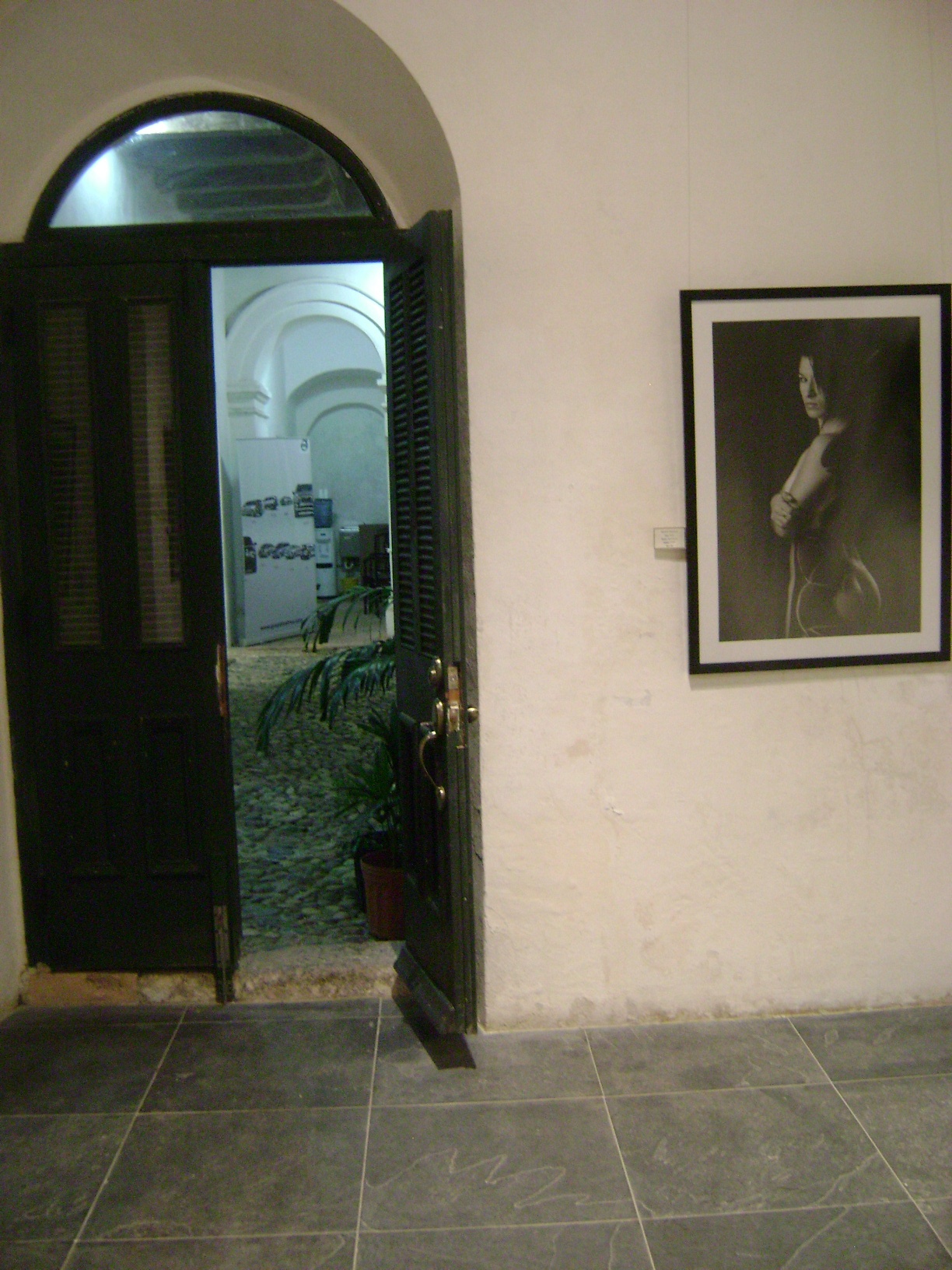 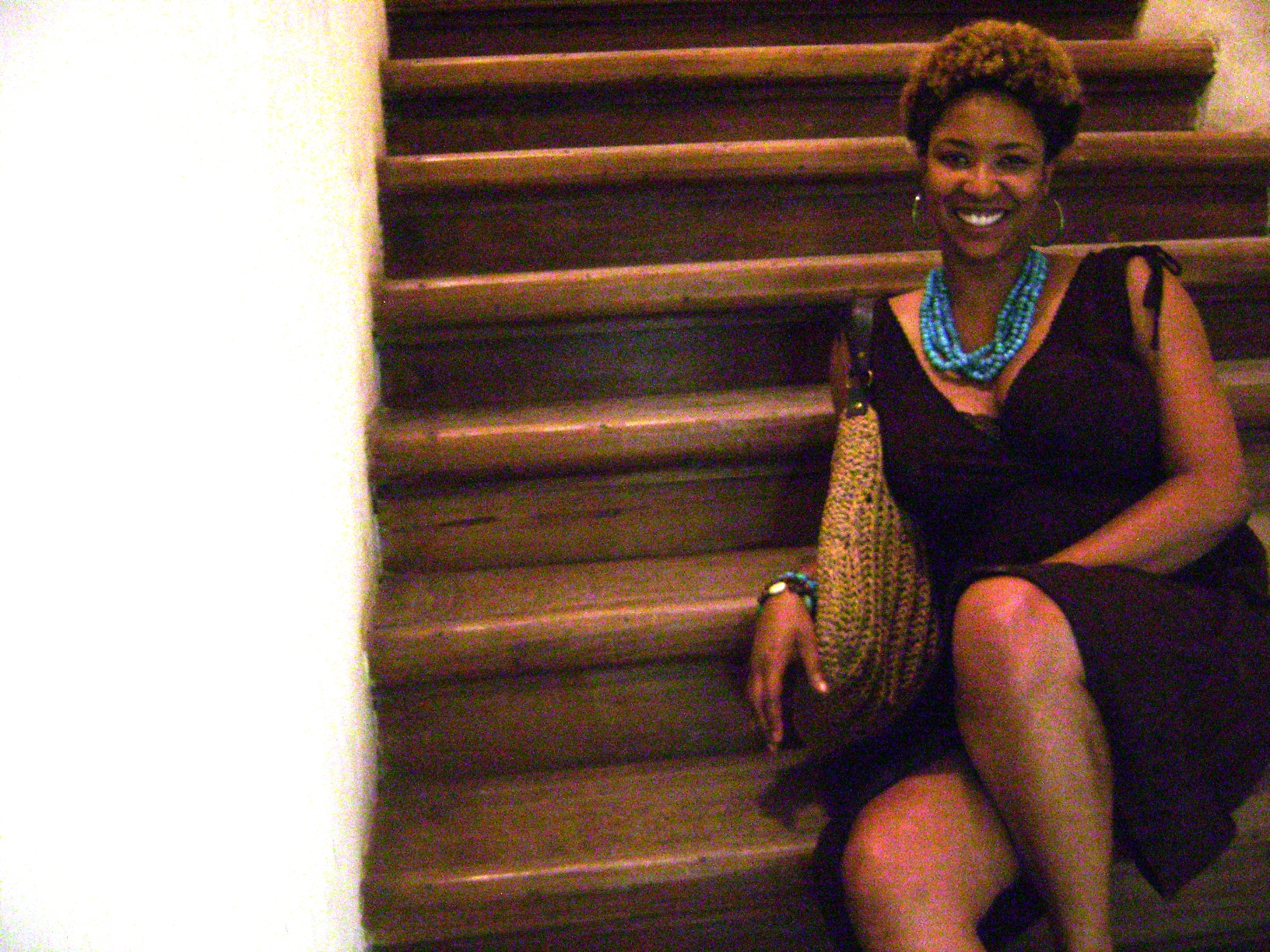 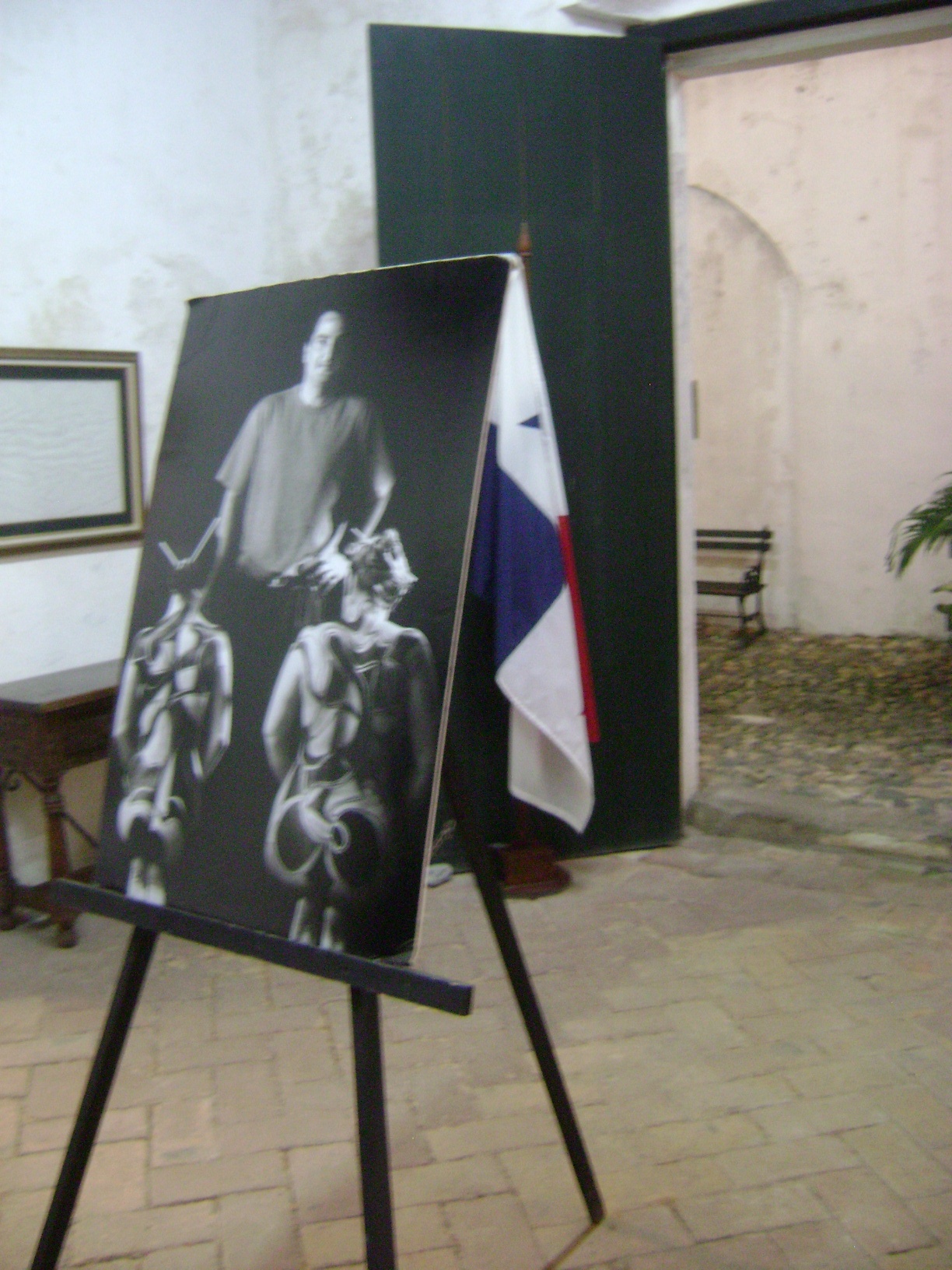 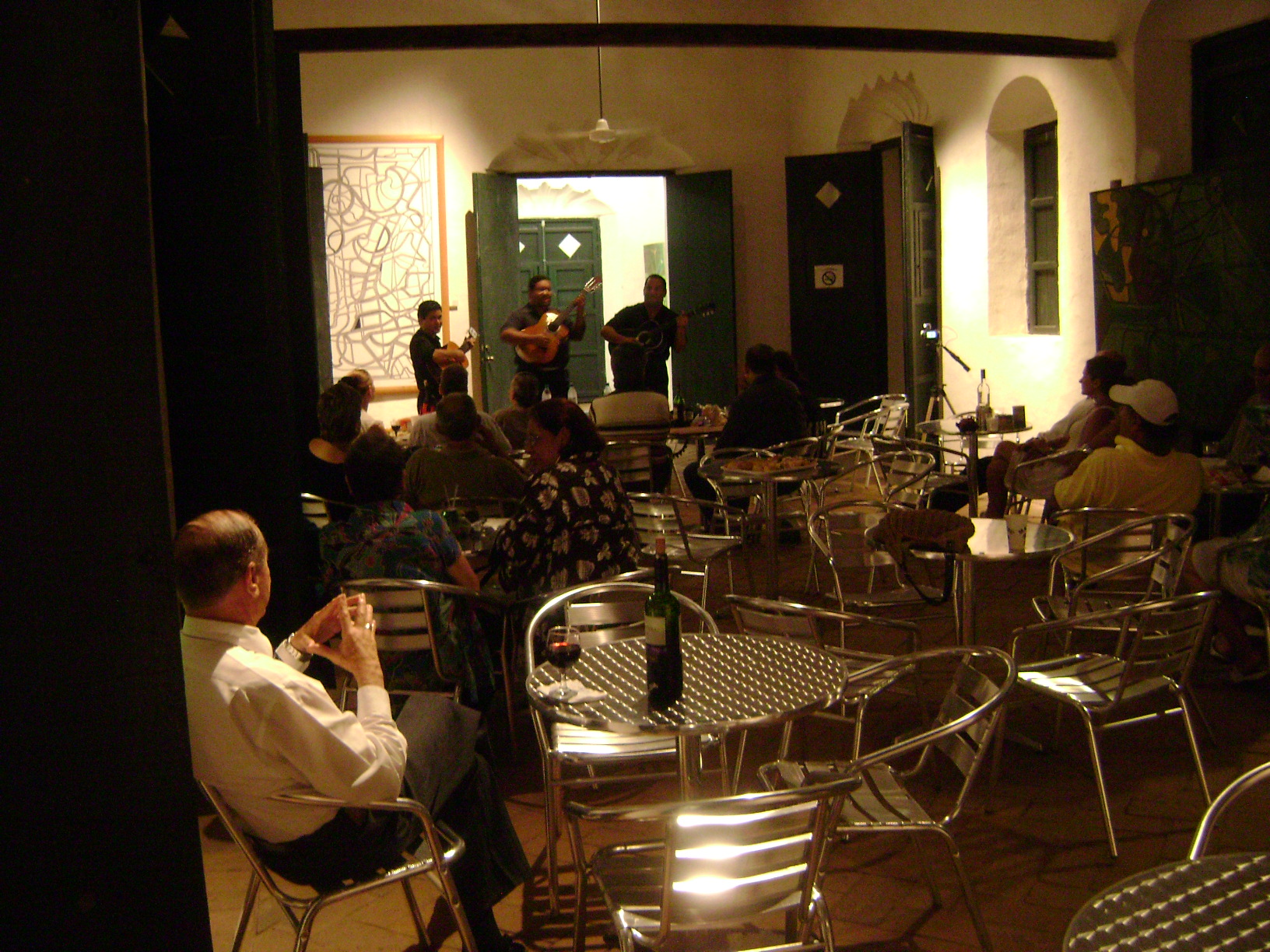 By now, our snack had worn off and we were ready for more substantial fare, so we headed over to Mostaza for dinner. In my pre-trip research, I’d read that Mostaza was one of the best restaurants in Casco Viejo, so I was excited to give it a try. A beautiful, all-white colonial style exterior gave way to a cozy, slightly rustic interior with a bustling waitstaff and a steadily growing crowd. Our waiter seemed just the tiniest bit thrown that we didn’t have reservations, but we were seated quickly at a table near the door. A live band was playing on the other side of the room, but unfortunately we couldn’t see them from where we sat. For dinner, I ordered corvina al ajillo and mom ordered langostinos. Before my trip I’d gotten the lowdown from a Panamanian native on the best local dishes to try, and at the top of her list was corvina – a fish with a taste / texture between a sea bass and a tilapia. Al ajillo is perhaps the most popular Panamanian preparation, with the fish being simmered and served in a garlic and oil sauce. Mom’s langostinos were prepared the same way. Our dishes came with rather uninspired sides of steamed broccoli and carrots and a mound of white rice, but the main features were plenty tasty. 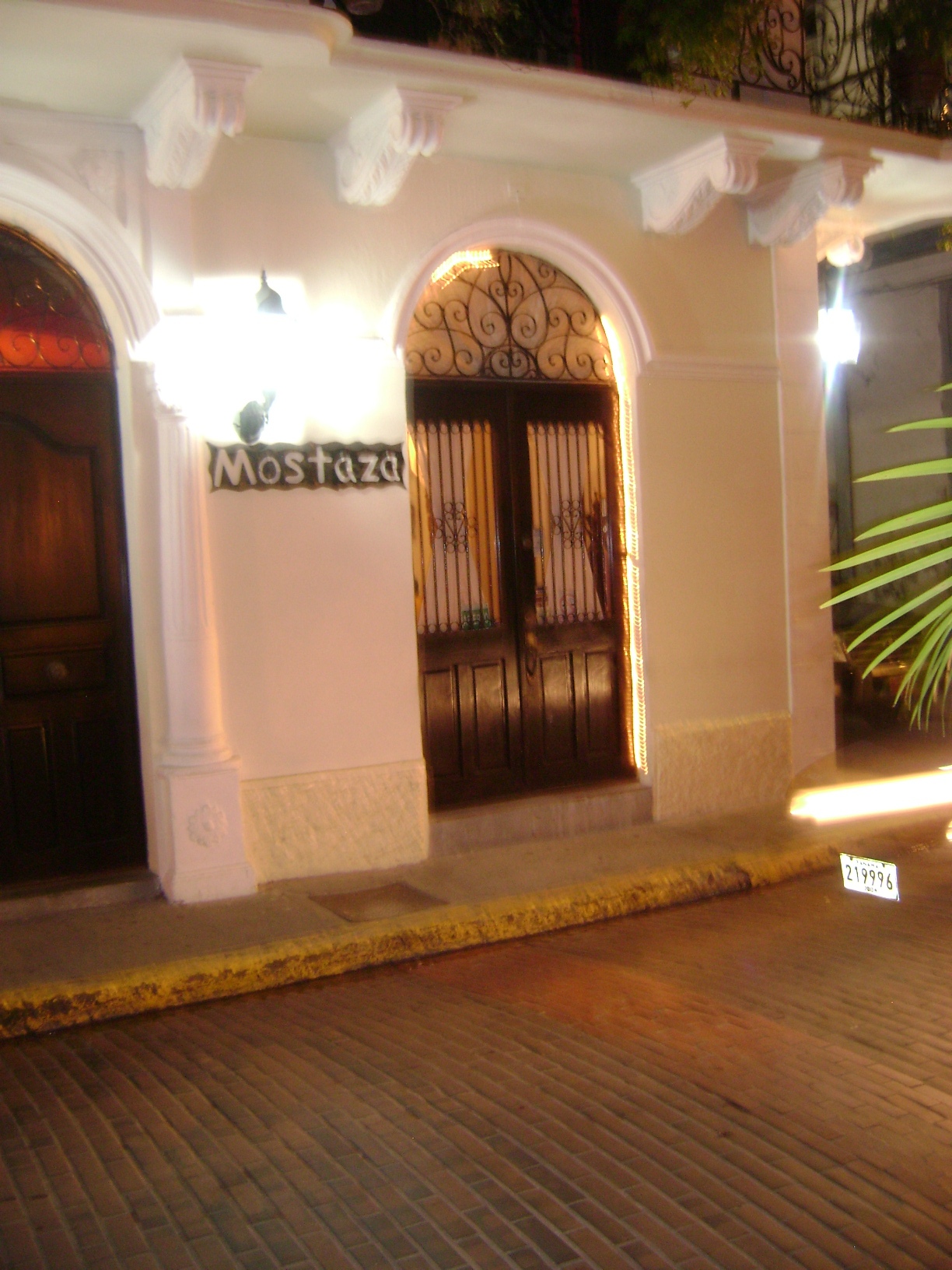 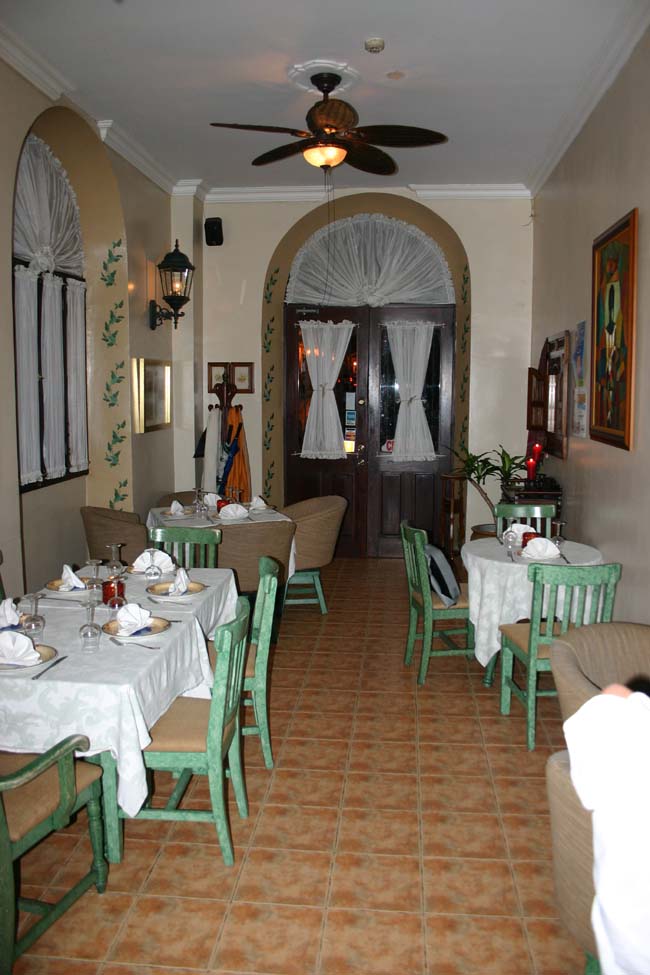 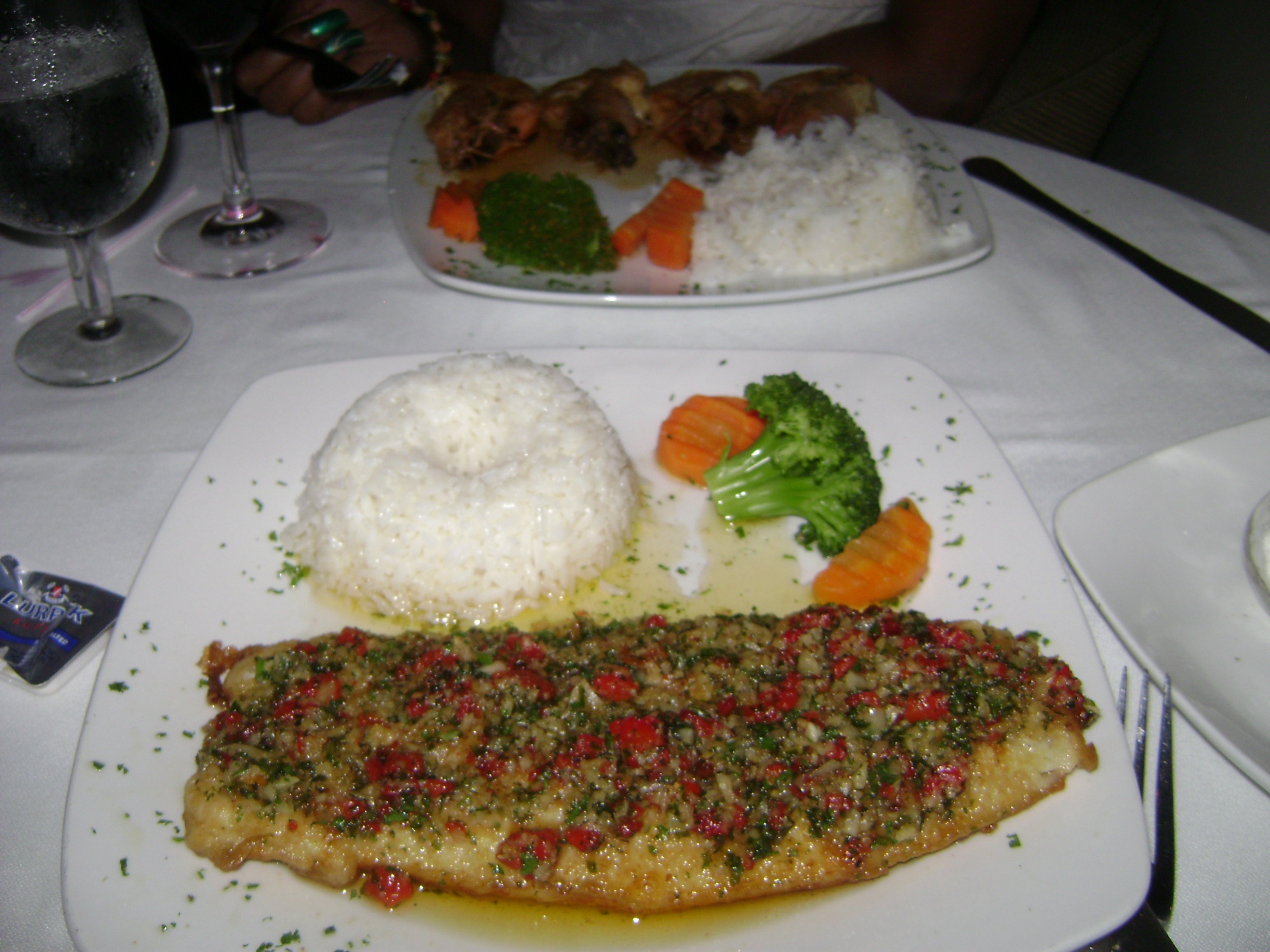 Back on the street, we considered taking our full bellies to bed, but realized we were on vacation and headed back to Platea, to see if the bartenders were right about the expected crowd. Boy, were they! The place was absolutely PACKED. At the front of the club, a live salsa band was whipping dancers into a frenzy, while the rest of us shuffled for a comfortable standing position that wasn’t in the path of people milling to and from the bar, to the dance floor, to the few already occupied seats at the rear of the place. We stayed to hear the band play one set, before giving each other the, ‘I’m ready if you’re ready’ look, and heading back to our room for the night.

Needless to say, I’m exhausted, but I wanted to drop you a line (or a few hundred of them) so I could share the day’s exploits. I can’t promise that tomorrow’s missive will be any shorter, but I do hope it’ll be just as entertaining….