how to make green chicken chili

There’s a great brewpub in East Atlanta called The Midway Pub. They’ve got an amazing selection of craft beers on tap and an even more amazing patio. When I lived in the neighborhood, I’d end up eating or drinking there an average of 3-4 times a month. The vibe of the place is casual, slightly hipster (Okay, okay. Reeeally hipster), and reasonably priced. You know, the sort of place that you might end up at on a chilly winter day, packed into a booth with some really good friends, ordering round after round of intriguing beer selections. 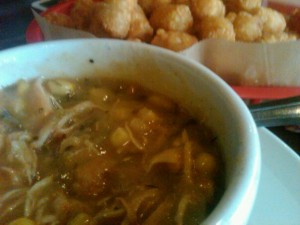 On such a day, I found myself in between rounds and in need of some stomach-lining, soul warming fare. Since few things go better with beer than chili, I ordered a cup of Midway Pub’s green chicken chili (aka, chili verde). It was so good, that I decided right then and there to master my own version of the dish.

Since then, my green chicken chili has shown up on my own dinner table, at the office, on a cabin trip with friends, and at the neighborhood chili cookoff. Each time, I’ve gotten very positive reviews about this decidedly different take on traditional red chili. In fact, I now prefer it to traditional red chili. 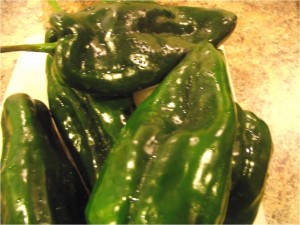 1 can chipotle peppers in adobo

Slice poblanos in half. Remove stem, seeds, and membranes. When oven is to temperature, place poblanos on top rack, skin side up and broil on all sides until skins turn black. Remove peppers and place in a plastic zipper bag. Close bag tightly and let peppers rest/steam for 10-15 minutes.

Add cilantro, garlic and green onions to food processor and process until the mixture is finely chopped.

Add olive oil to pot and heat on medium. Add half of cilantro mixture and all of white onion to pot. Sprinkle with remaining seasoning mixture and stir to combine. Sweat vegetables for about 5 minutes.

Add chicken, lime juice, and chicken broth to pot. Bring to a gentle boil, and let cook for about 10 minutes or until chicken is just tender. Using tongs or a fork, remove chicken from pot, and place in large bowl to cool.

Turn pot to high and boil remaining broth on high until it reduces by half.

Once chicken is cool enough to handle, cut chicken into bite-sized pieces using kitchen shears or shred by hand. Return chicken to pot and reduce heat to medium-low.

Add salsas, remaining cilantro mixture, and chopped poblanos to pot. If you’re using chipotle, add a couple of teaspoons of the adobo sauce to the pot (you can add the chipotle peppers too, depending on how spicy you want the chili). Cover and simmer on medium-low for 20-30 minutes.

In the meantime, drain cannellini beans in a strainer and rinse well with water. Add about a cup of the cannellini beans to food processor and process to a paste. Add beans and bean paste to pot, stir to combine. If you’re using diced tomatoes, add those as well. 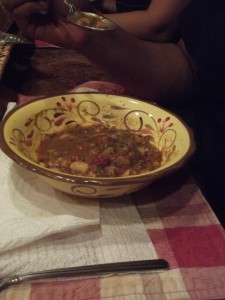 If chili is not as thick as you want it, mix a small amount of cornstarch with hot water in a small bowl and add the mixture slowly to pot, stirring until chili reaches desired consistency. Add salt to taste.

Remove from heat and serve with tortilla chips. Garnish with cilantro, green onions, and/or your favorite shredded cheese. And… a spoon. A really, really big spoon.

Note: If I’m really in the mood, I’ll fry my own tortilla chips to go with the chili. They taste so much better than store-bought and are worth the extra effort. To make: Cut corn tortillas into quarters. Heat 1 Tbsp of olive or canola oil in a large skillet on medium-high. Fry cut tortilla for about 1 minute on each side, or until lightly browned. Remove and drain on paper towels. Sprinkle with salt and cumin powder or any remaining seasoning mixture.