I know I shouldn’t love them as much as I do, but…I do. I mean some people like french fries, but I truly love them.  You know, kinda like an addict truly loves crack. Ask any friend of mine who’s made the unwise decision to reach for a couple of fries from my plate. Let’s just say, no one has ever done it more than once.

This weekend, I happened across Meredith Ford’s latest list of the 5 best fries in Atlanta. Of course, being the fry fiend that I am, I made a mental note to check out a couple of the places on her list whose fried taters I haven’t yet sampled (Shaun’s and Porter Beer Bar), but there were others that I was surprised made the cut (Steak and Shake? really?). After reading, it inspired me to pen my own list of Atlanta restaurants with the best fries.

Check ’em out and let me know if there’s some other places you know of in the city where I should be fueling my addiction.

Something about the whole Five Guys fry experience is just, well…dirty. But that’s part of what makes them so good. Oh you’re just gonna throw the fries into a little styrofoam cup? How delightfully low-brow! Grease stains on the bag? But someone might see…oh hell, I don’t care. Give ’em to me, give them all to me! Let them spill over the cup into the bag. Let the cajun seasoning stick to my fingers so I have to lick it off. And when I’m done devouring them like I have absolutely no home training, hand me a napkin so I can ever so daintily dab the evidence off my lips. Nothing to see here, folks. Keep it movin’.

Here’s where Meredith and I definitely agree. This authentic tapas restaurant serves up fried potatoes with a Spanish flair. Eclipse di Luna’s patatas bravas are chunky cut, covered in a saffron-hued seasoning mix, and served with a side of romesco sauce, which is sort of like a spicy aioli. Ay, que sabrosos! 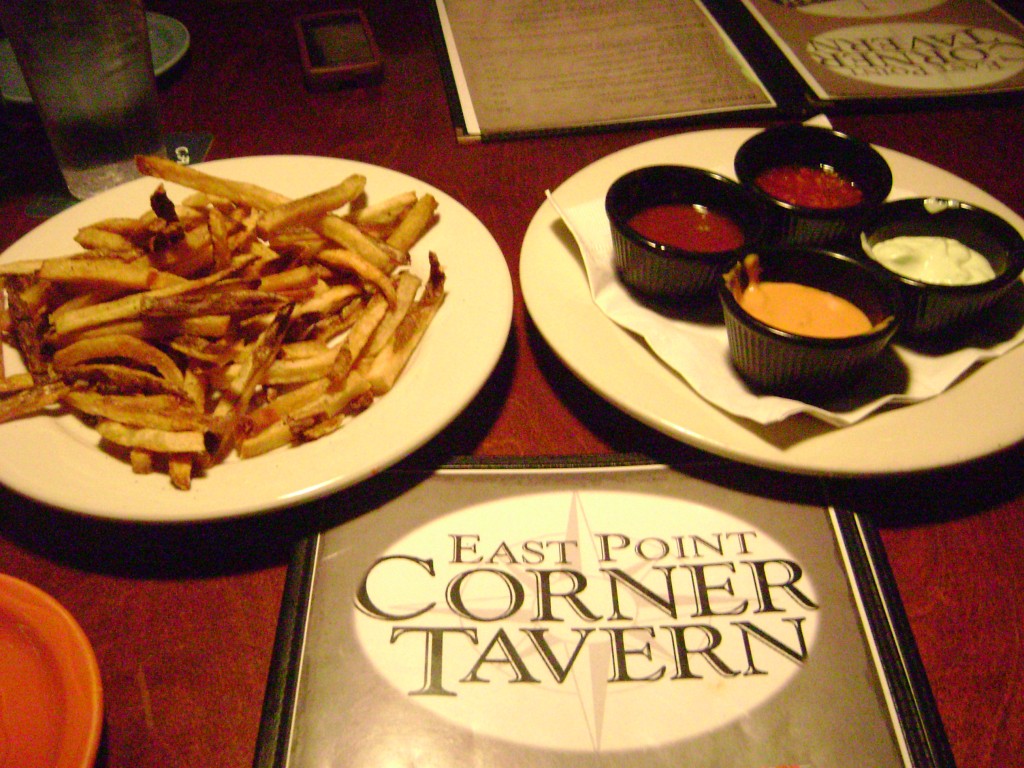 Honestly, the fries at Corner Tavern are only slightly above average. But what pushes them to such a high place on my list are the dipping sauces, of which there are six to choose from. An order of the never-frozen, skin-on spuds comes with your choice of not one, not two, not three… but FOUR dipping sauces! My faves are: curried ketchup, BBQ, and Thai chili (I usually double up on this one).

The shoestring potato often gets the shun from me. Mainly because most places just don’t do them right. They’re either so thin that they fry up hard and insubstantial; or they’re underseasoned and just taste like… shoestrings. Cafe di Sol, however, avoids both of those missteps. Their hand-cut shoestrings are just thin enough to get a good crispy exterior, but thick enough so you still enjoy the mouth feel of the fluffy interior. They’re also liberally seasoned with a mixture of what I think is garlic, salt, and pepper, and sprinkled with fresh chives. I effs with these crabcakes.

1. The Shed at Glenwood

The reason for The Shed at Glenwood claiming the #1 spot in my list can be summed up in three words. Black. Truffle. Powder. A light sprinkling of this earth-colored pixie dust takes an already spectacular fry to drool-worthy proportions. The Shed’s taters are made like the traditional Belgian fry (should it really come as any surprise that the folks who give us such great beer would also have such good fries?). Cut into batons and fried twice – once on low heat and once at extremely high heat – the result is a crispy fry with a luxuriously creamy interior. But thankfully, even perfection isn’t good enough for The Shed. Chef Lance Gummere makes them absolutely decadent by adding black truffle powder – which retails for around $15 an ounce. But it’s worth every penny. The powder imparts a rich, umami flavor that’s almost like eating meat. OPULENCE! Thank you Chef Lance! And shouts out to the Belgians. Oh, and uh…good looking out, pigs.