how to say ‘cheers’ in 50 languages 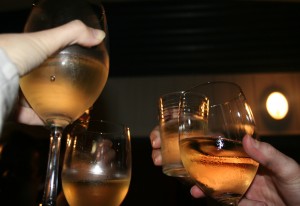 A long time ago I read somewhere that the toast originated during the Middle Ages. During large banquets hosted by feudal lords and kings, each guest would toast by pouring a little bit of their drink into their neighbor’s glass, and by the time the toasting was done, everyone would have what everyone else was having. In a time where hostile takeovers often involved secret poisons, this sort of toast was done to make sure that if there were any poisoners present at the feast, he or she would also get a taste of their own medicine.

Hopefully, Dear Reader, you won’t find the need for such paranoid celebratory rituals, but should you happen to find yourself in mixed company, this handy guide from Matador Nights will help you make a proper toast that everyone will understand.

How to Say Cheers in 50 Languages