Behind the Scenes at the NBAF: Rebekah Jones – Production Manager 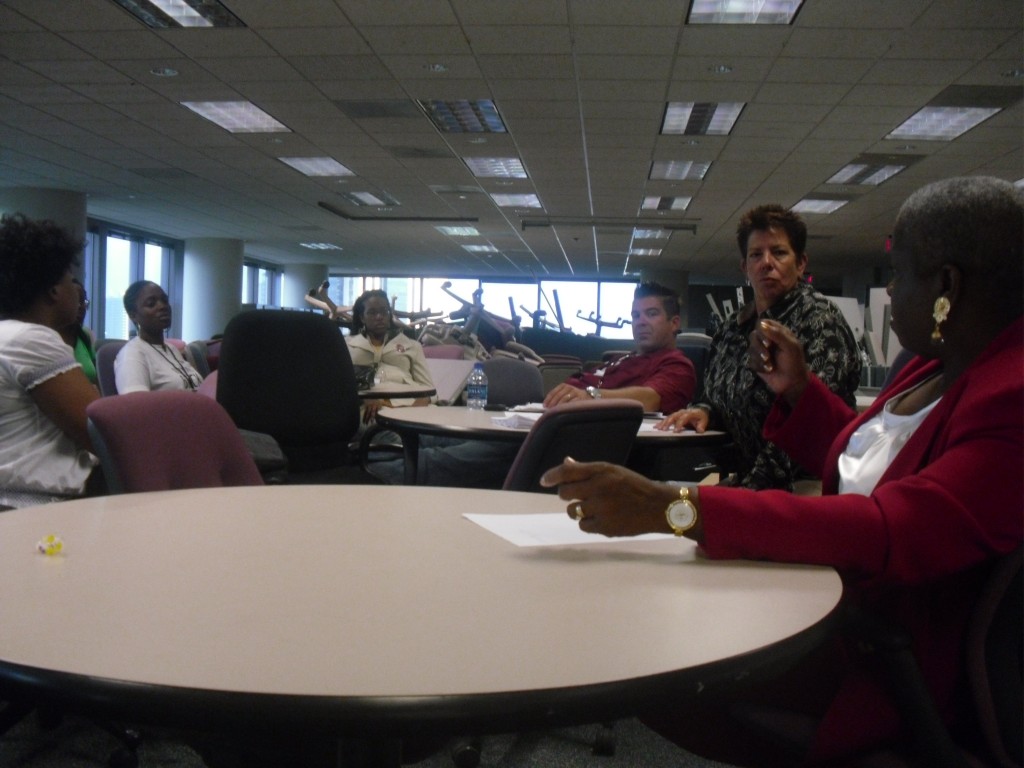 It’s a little past 8 am on Thursday morning, the second official day of the 2009 National Black Arts Festival. Several of the festival’s staff members are seated at multiple round tables on a lesser-used part of the 5th floor headquarters office. On the other side of the floor-to-ceiling windows, the sun is defiantly beaming through the last of the overnight storm clouds.

The woman with cropped, spiky hair sitting at the head of the group speaks.

“Just so y’all know, we do have a weather fairy, so it’s not going to rain on the festival.”

The woman is Rebekah Jones, who wears the double title of Festival Manager and Production Manager for the NBAF. She acts as Mistress of Ceremonies for this morning’s staff meeting, quickly running down what’s going on at each of the day’s major events and venues, and double-checking to make sure everyone has their marching orders. Since a major part of the festival – the International Marketplace – will be held outside, the topic of the weather comes up again soon, this time with a bit more gravitas.

“The only reason we will shut down is if there’s lightning. Our setups are all graded for up to 40mph winds. If there is lightning, the head of security will make the call to me or Leatrice (NBAF Artistic Programming Director), and we’ll make the decision to pause the festival, and issue ‘seek shelter’ announcements to the crowd.” Before the team disperses, she makes sure everyone has a copy of the Crisis Response Plan for the festival.

When the meeting ends, Rebekah heads back to her office and settles in behind her desk. Within 30 seconds, the small office is filled with 3-4 staff members with last-minute tactical questions for her. After handling the first few questions, she shoots me a look and says, “Time for a cigarette break,” my cue that we’ll have to conduct our one-on-one interview downstairs.

Once there, we begin.

ksolo: So how long have you been with the Black Arts Festival?

RJ: Since 2000. I think. Whatever year Stephanie (Hughley)joined. We’d worked together at another festival, so when she came over here, I thought it would be good to work with her again.

ksolo: For the layperson, what exactly does the co-title Festival Manager / Production Manager mean? What are you responsible for?

RJ: Well, I’m a Project Manager. I work as a PM for several clients, Harley Davidson is one. I’ve been the Production Manager for the Atlanta Civic Center for the past 12 years.

ksolo: Wow, do you sleep?

ksolo: With the changes in this year’s festival – the reduced timeline, the central location – has it been an easier project to manage? Or are there some things that are more difficult?

RJ: Well, the coordination has definitely been less cumbersome. There are fewer moving parts. But this year, we’re shutting down a city street for four whole days. And you have to jump through a lot of hoops for that.

In a moment of candor, Rebekah uses a four-letter word to describe the frustration of the hoop-jumping, and asks me to excuse her French. I assure her that I too speak French on occasion.

ksolo: About how many staff and volunteers do you have for this year’s festival?

RJ: With contractors and all, we’ve got over 100 people. And Keith (Hill) has volunteers on a waiting list. We have a great synergy of people, a great team.

ksolo: Do you have a favorite festival memory?

RJ: (pauses to think for a bit) Opening day. Every year. You know, this is the oldest surviving black festival in the country? Which is great, but also sad… since it’s only the 21st year. But it’s huge. It’s such an important event. Last year, we did 273 shows in 10 days. So the number of impressions is just huge. We’re in over 20 spaces this year, between festival events and events that partner with the festival.

ksolo: That’s a pretty impressive reach, especially for a city as spread out as ours.

RJ: Yep. The Dogwood Festival and the National Black Arts Festival are the only 2 festivals remaining in Atlanta that originated in Atlanta. The Atlanta Arts Festival is gone, Montreux is on hold. But we’re not just a local festival. We’re national. People plan their family reunions to coincide with the festival.

ksolo: Wow – that’s a real testament to the impact the festival has.

RJ: Yeah, we couldn’t do it without the people we have working and volunteering. We run up against a problem, and we don’t think, ‘Oh, it can’t happen.’ We think, ‘What has to happen to make it happen?’ You have to remain very fluid.

When the river starts flowing, you can either build a dam, or… you can jump in and swim.

The NBAF Summer Festival goes from July 29 – August 2, 2009. The 5-day long festival highlights the artistic and cultural contributions of Africans and African-Americans in the US. For a complete schedule of events, visit www.nbaf.org/events. To donate to the festival, visit www.nbaf.org/support.

Tags: atlanta artistsatlanta things to do